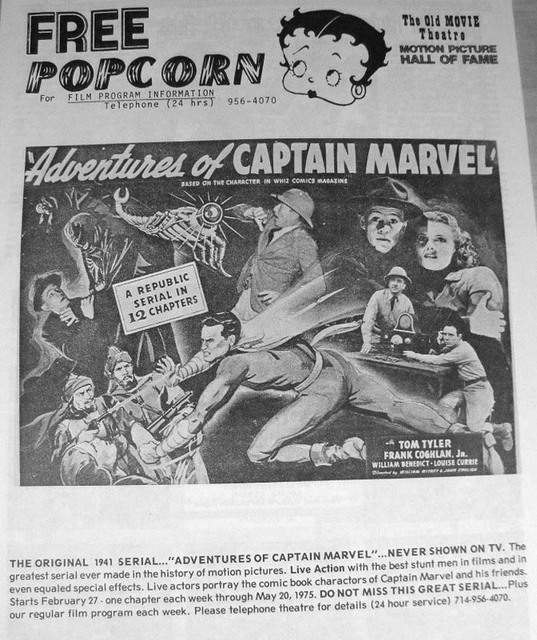 This movie theater and museum, which had a brief run in the early-1970’s, may be Orange County’s most unheralded and forgotten destination for classic films. The 48-seat cinema opened in June of 1971 in a converted banquet room at the Saga Motel, directly across the street from Disneyland. The projection booth was enclosed and it is assumed that they ran 16mm films. It was also known as the Old Time Movie Theater or in the advertisements just ‘Old Movie’.

The theatre showed pre-1950 films and the silents such as those of Lon Chaney, Charlie Chaplin and Rudolph Valentino. Other favorites were the Marx Brothers, Laurel and Hardy, W.C. Fields and Errol Flynn. They also screened cartoons, Flash Gordon serials and they at one time held a 3 Stooges tribute.

The founder Douglas Wright was profiled in the Los Angeles Times on February 23, 1972. Wright said he was a former motion picture promotion man who during his career amassed a collection of “2,000 autographs of leading motion picture stars, an aggregation of props, costumes, early projectors, cameras and other items". The theater could not display his vast collection but at one time they had some of the original stop-motion models from “King Kong” on display. In later years the museum space was downsized and the seating capacity of the theatre was increased to 98.

In March of 1973 the Hall Of Fame celebrated the 40th anniversary of the release of “King Kong.” At the ceremony Merian C. Cooper and Ernest B. Schoedsack, co-directors and producers received a special award.

After nearly a five-year run, the Motion Picture Hall of Fame dropped out of the LA Times Independent Theatre Guide in February of 1976. The location was where the Ramada Maingate at the Park is today. Some of the original buildings of the motel remain but it would be hard to pinpoint the cinema’s exact location.

The theatre really struggled with it’s location. In addition to being hidden in the back of the complex, patrons couldn’t utilize the motel’s parking lot; you had to park at a neighboring business and walk over to the motel. Tickets were $1.00 for the memorabilia museum or $2.00 for the museum and a movie.

Groucho Marx was in the audience for the showing of “Animal Crackers” when the movie was re-released in the 70’s. (see Photos section)