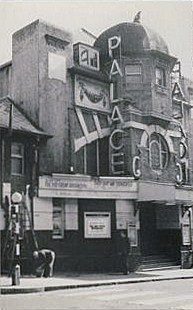 Located in Gateshead, Tyne & Wear on Sunderland Road, only 200 yards from the Scala Theatre which was on the corner of High Street and Jackson Street. Built for and operated by George Black, it opened as Black’s Palace, a cine/variety theatre, on 27th December 1909. Seating was provided in stalls and circle levels. The stage was 30 feet deep and there were two dressing rooms. In 1911, the stage was enlarged.

The first 3D film to be shown at the Palace Theatre was Fernando Lamas in “Sangaree” on 26th October 1953, and the first CinemaScope film to be screened here was Dale Robertson in “Sitting Bull” on 11th April 1955.

The Palace Theatre was closed by the Rank Organisation on 24th September 1960 with Frankie Howard in “Up the Creek”. The nearby Scala Theatre (also operated by Gaumont/Rank) had closed in 1956. The Palace Theatre building was sold in 1962 to become a warehouse for Elders Walker Glass Co. Ltd.