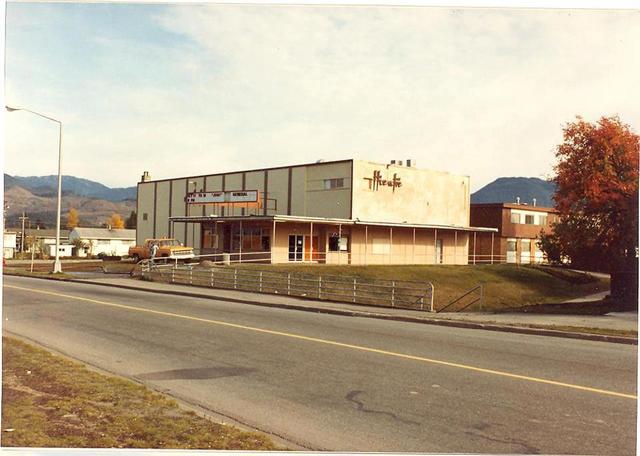 The 700-seat Nechako Theatre opened in summer of 1956 with Tyrone Power in The Eddy Duchin Story". Due to dwindling attendance, the Nechako Theater closed in 2007. Since then, a local church has taken over and renovated the theatre to show occasional movies there.

An item on this web page says that the first movie shown at the Nechako Theatre was The Eddy Duchin Story. The movie was released in the summer of 1956.

An article about the retirement of long-time theater operator R.C. “Cece” Steele in Boxoffice of March 2, 1970, says that he opened the Nechako Theatre with partner Harry Howard. The article doesn’t give the date, but a finding aid to resources in the Kitimat Museum and Archives lists a photo of construction underway on the house, dated October 26, 1955. Unfortunately, none of the 19 photos of the theater in the archives are available online.

Kitimat is a planned community developed by ALCAN (Aluminum Company of Canada) beginning in 1953. It is home to a major aluminum smelting plant, a major hydroelectric project, and a port handling liquified natural gas, among other, smaller industrial facilities. The town reached a peak population of over 11,000 in the 1990s, but has since declined to less than 9,000.

With a master plan by the noted American urban planner Clarence Stein, Kitimat features a main commercial center, but for some reason the theater ended up being built in Nechako Centre, a small shopping plaza about a mile away. While many of the commercial and public buildings in Kitimat were designed by the Vancouver modernist firm Semmens & Simpson, I haven’t been able to confirm that the Nechako Theatre was one of them.