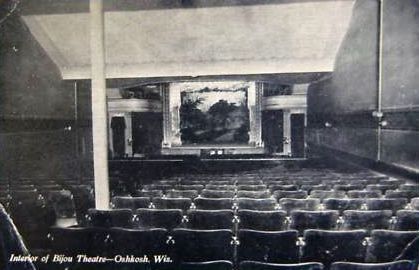 Opened in 1905 and operated by Jones-O'Brien, the Bijou Theatre was renamed Majestic Theatre by 1914.

The first photo in the Historical Photos section of the web site of the Time Community Theatre shows the Time’s predecessor, the Superba Theatre, with the Bijou in the foreground. The building has lost its ornate cornice and parapet, but is still recognizable.

Caption information for this interior photo of the Bijou says that it opened on January 18, 1904, closed in 1906, and reopened as the Majestic Theatre in 1912. But then it also gives the address of the Bijou as 140 N. Main Street, so I don’t know how accurate the other information is.

Oshkosh did renumber many of its lots in 1907, as well as during the more general overhaul of 1957, so it’s entirely possible that, as of 1904, the Bijou’s lot was numbered 140 N. Main. The 1907 renumbering included changing the odd and even-numbered sides of many streets, which prior to that had not followed a standardized pattern. It’s possible that no other American city ever endured so irregular a street numbering system as Oshkosh did, or for so long a time.

Another photo has solved the mystery of the two different old addresses for the Bijou. The Bijou occupied two different locations. This photo shows what must have been the first Bijou, of 1904. It is on the east side of Main Street several doors north of Washington. The building with the white awning near the corner of Washington, at right, was the Lyric Theatre, at old address 132 N. Main Street. That means that old address 140 N.Main probably was the correct address of the Bijou of 1904-1906.

The second location of the Bijou, which became the Majestic, was in one of the buildings farther up the block on the left side of Main Street. I think that the library’s interior photo must show the second Bijou. The first Bijou looks like it was a storefront nickelodeon conversion. Its replacement most likely opened in 1906, which the interior photo’s caption gives as the Bijou’s closing date, and operated as the Bijou until becoming the Majestic in 1912.

The photo from the Time Theatre’s web site (linked in my first comment on this thread) shows that the Bijou was contemporary with the Superba, which operated under that name from 1908 until 1911 or 1912.