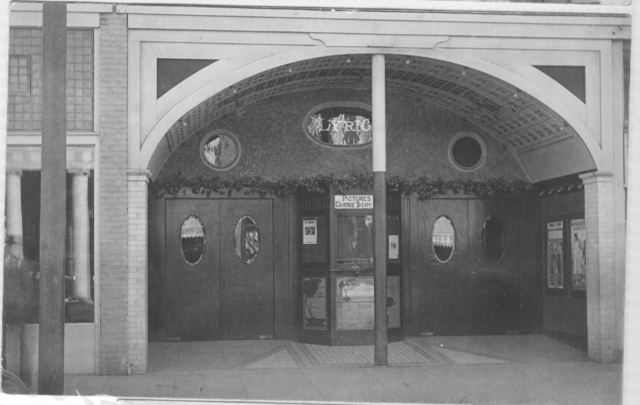 Opened in 1912, the Lyric Theatre in Oshkosh was an early, modest theatre of which almost nothing is known.

The address 132 N. Main Street is obsolete. In 1957 Oshkosh renumbered the lots on Main Street. The old 100 block became the modern 400 block.

This historical photo shows that the Lyric Theatre was almost at the corner of Washington Street. The Lyric and its neighbors were demolished long ago when the site was cleared for the First National Bank building, which appears to have been erected in the 1920s. The modern address of the Lyric’s lot would probably be either 402 or 404 N. Main Street.

This postcard which was postmarked 1913 partially shows the Lyric Theatre.

Photo taken 1913 my grandfather noel houze ran it then

John Houze: I don’t know if you’ve seen this one or not, but your grandfather was also in a group photo of five theater men that was published in the December 13, 1913, issue of The Moving Picture World (scan at Google Books.) I’ve seen many photos of theater managers from that period and most of them look like the sort of toughs you wouldn’t want to run into in a dark alley, but your grandfather was a notable exception to the rule. I’ll bet many of the young ladies of Oshkosh went to the Lyric just to get a look at him. He was quite a handsome fellow.