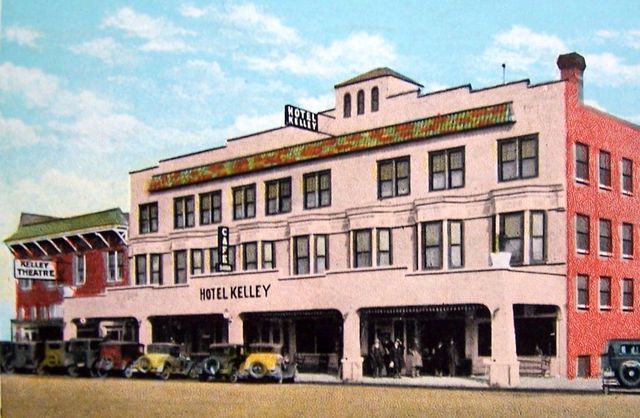 The 500-seat Kelley Theatre opened on March 15, 1923 with Cecil B. DeMille’s “Nice People" starring Wallace Reid. The Iola Daily Register noted in 1938 that E. Van Hyning leased the Kelley Theatre from 1923 to 1933 at which time he terminated the lease and built the Uptown Theatre.

It appears that the Kelley Theatre operated at least part time until around March of 1938 when its advertisements dropped out of the Register. Beginning in May of 1946 a classified advertisement appeared saying that the theatre was for lease and could be remodeled to suit the tenant. Later tenants included a Firestone store, Hays Furniture and finally Clark’s School of Cosmetology.

The Register reported in January of 1972 that the Kelley Hotel was being razed to make room for a bank parking lot. It is assumed that the wing of the hotel, which housed the former theatre, was demolished after that.

The principals of the firm of Washburn & Stookey were Clarence Washburn and his brother-in-law, Roy Stookey.