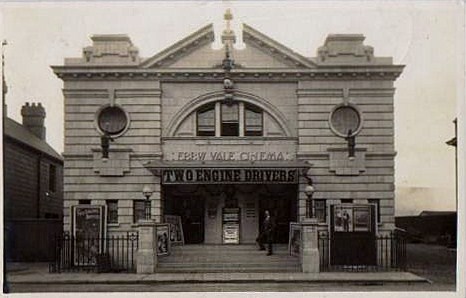 Located in the South Wales town of Ebbw Vale, Monmouthshire. The Ebbw Vale Cinema was opened in 1910 and was the first purpose built cinema in the town. It originally had seating for 800 and the proscenium was 22 feet wide. Apparently it was not a great success, and had closed by 1914.

It was taken over by new owners in 1915 and reopened as the White House Cinema. By 1918 it was operating a a music hall with some film shows. This use continued until it was equipped with a Western Electric(WE) sound system in 1931, and it became a full time cinema again.

Unfortunately on 21st November 1931, it was badly damaged by a fire, which destroyed the stage house and roof of the auditorium. It was soon repaired, and it has been recorded that comic film star Harold Lloyd made a personal appearance at the White House Cinema. It was operated by Ebbw Vale Cinemas Ltd., part of the Jackson Withers group.

Around 1953 architect David Evelyn Nye was employed to design plans to widen the proscenium to allow screenings of widescreen films, but the White House Cinema was never equipped to screen CinemaScope films, and was closed around 1956. It was demolished in 1958. A Woolworths store was built on the site, which in 2009 had become Gus Jones Jewellers.

There is some additional historical detail about the White House Cinema on this webpage; (scroll down about two-thirds of the way down).