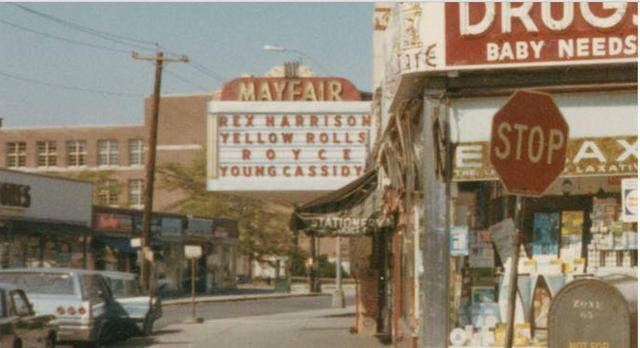 In the shadows of the Fresh Meadows Theatre lies this little neighborhood movie house, originally known as the Mayfair Theatre. It opened in September 1940. By 1950 until at least 1957 it was operated by Century Theaters. It later went over to screening adult movies.

On March 15, 1996 Mohammad Asif took it over and it was renamed Bombay Theatre. It became a venue for Bollywood films and is operated by Iman Multimedia Inc.

I reorganized my photobucket account and created this Mayfair/Bombay album for all the images I previously posted back in September and October. I also stole a few vintage images Warren had posted and stored them here as well. The old links no longer work.

It also occured to me… shouldn’t this listing be changed to “Bombay Theater” with “Mayfair Theater” as an AKA (or vice versa)?

The only time I came view of this theater In it’s operation as it’s “The Mayfair” days Is when a friend of mine had to give another friend a lift to It.. to see some porno’s lol..
I’ve been there recently a few times to do some laundry across the street at the 24hr laundromat.
BTW people where are you finding those fun newspaper ad’s??

The old neon border on the marquee was already masked by aluminum flashing by this time, but the original facade above the marquee still evidenced original (albeit worn) ornamentation, which has been completely eradicated with the theater’s sprucing up as the Bombay:

I don’t have a paper handy to check, but it’s possible the theater isn’t listed at all. When I was at the Mayfair in October of 2005 to take those interior photos, I did not take note of an odor such as that which “taurus” on Yahoo so eloquently described. However, the floors were a bit tacky.

In any event, the name on the marquee is “Bombay” just as the name on the old Earle marquee in Jackson Heights is now “Eagle.” The Eagle Theater page on CT accurately reflects its current name with “Earle” as a previous name, and so should the Mayfair’s page be amended to “Bombay Theater.”

Legal problems in the seventies:
http://tinyurl.com/3bfspm

We saw the “devil and Miss joes here.and ny friend said to his wife he knew what happended to the fruit!!!!!!

The following is a link to an article in the Queens Chronicle , and is courtesy of Warren. He comments on the imagein the article: ‘A 1942 photo shows a double feature of “I Wake Up Screaming” & “Swamp Water” on the marquee’.

Sorry, tangentially off-topic, but someone asked:

“Quantum Leap” – the restaurant or the health food store are no longer there. They changed hands a few times and was mozying a long until the early 2000s when it changed hands after already being in dire straits. It was all downhill from there. In the restaurant’s place is a Colombian restauranmt named “Tienda Vieja” which is owned by a hard-working couple; they make VERY good food, reasonably-priced.
The health food store lay dormant for a short while until a Kosher spupermarkey moved in (2009?), named “Victoria Supermarket”. You don’t have to be Harry Helmsley to know that a supermarket on Fresh Meadow Lane – an industrial street with no parking – is a bad choice for a supermarket. They closed up shop a couple of business days ago and moved on.