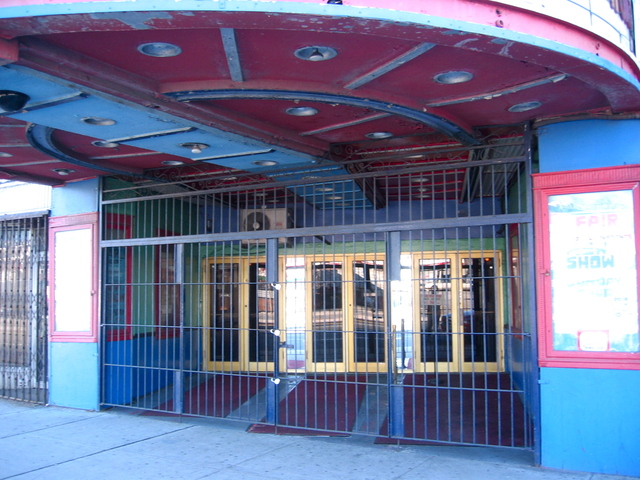 Not too far from the Shea Stadium (now demolished and Citi Field built on the site in 2009) and LaGuardia Airport on Astoria Boulevard in the East Elmhurst section of Queens. The 599-seat Fair Theatre opened in 1939 and was named after the World Fair which was held on Flushing Meadows.

Was thinking about checking out the cinema but a little reluctant.Do they still play adult fims there?

There is a doc on vimeo about this theater called “Been Too Long at the Fair.” It’s free to see the trailer and only a buck to rent. I’m watching it now. Short film, interesting.

Mike- Remember when strippers were “exotics”?

Anywhere know where the box office was located back in the day?

An update is needed here. There are actually five screens. The main auditorium has not been divided and is mostly in its original condition except for the addition of silver tinsel curtains and the stage being enlarged.Double feature last run, kung-foo, and classics are shown here with program changes every Sunday and Thursday. They also show special events like awards shows and sporting events. Most of the seating in the orchestra level was reupholstered about 10 years ago when new carpet was installed. The seating in the balcony was reupholstered as well but looks like it was taken from a much older theater. The next screen is located behind the lobby in a room with seating for seven with a similar program as the main auditorium. The other three screens are in spaces that used to be shoppes to the right of the lobby. One has a small standing room only balcony. The next one has video booths behind the screen, and the last one has video booths in the back. Adult double features are shown in those auditoriums.

Comment added under photo of “Bad Seed/Tea and Sympathy” ad

I added pictures that I took yesterday. It was near closing time.

I wish the quality of the pictures could be better but I didn’t want to a chance staff might tell me t I stop.