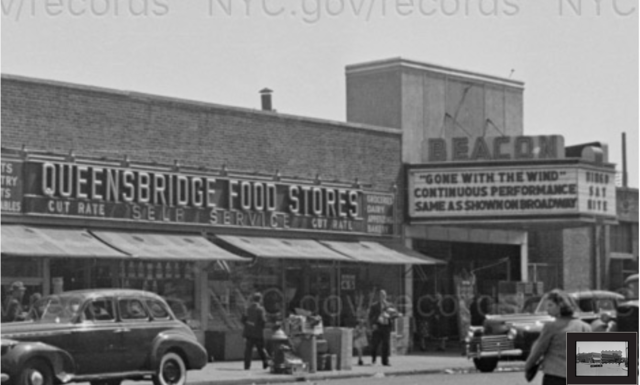 The Beacon Theatre was opened in June 1940 in Long Island City, Queens.

I remember going “around the corner” from 40-14 10th Street every Saturday to the Beacon Theater for only 1.00
“Hercules On Chain”, “Peter Pan” and those hershey kissies, boy do I remember. I was about 7 or 8 years old. Back in the day, it was good and healthy. Vanessa Vanterpool

1954-1971 Vanessa Vanterpool
I remember “Hercules on Chain” and “Peter Pan”. Every Saturday, around the block from 40-14 10th Street. Those were the days, very happy days.

Wow …. I can’t believe there is an entry here for the Beacon in LIC. I see that the last post here was back in 2005 so perhaps I am a bit late to keep up the momentum. I too lived in the “projects” from 1952 – 1962 until we moved to the very upscale neigborhood of College Point, Queens .. (kidding of course)… I then moved to Forest Hills and finally I bought a house in Bayside, Queens which is where I currently reside. I’ve come almost full circle in that I work for Citigroup in the LIC facility. Every now and then I take a ride in an around the “projects” when I am feeling a bit nostalgic. Those were truly the good old days. Entertainment was simple…

Once again I wanted to send my photo, but your web site said not to do so. I hope you’ll have that feature up and coming soon. I would just LOVE to see all the photos that have been submitted…ydorap

ydorap you can use photobucket.com to post images. Gerald A. DeLuca suggested that I use that site to post images of the Beekman a couple of years back, and it was free of charge, simple, and the links still work. If you have a computer and a digital photo, you can use Photobucket easily

Google shows an old building with this deli as part of the structure. Listen in 1959 yellow pages, phone number was STilwel 4-5353.
http://tinyurl.com/68vqb5

Click “view larger picture'‘ on the link above and then "street view,’‘ and I believe you can see where the marquee was attached to the building to the right of the deli. We lived in Queensbridge until I was around 10, and we frequently went to the Beacon, where my Uncle Mike’s brother John worked the door. Among the movies I remember seeing there were The Man With the Golden Arm, The King and I, South Pacific, and Love Me Tender.

As a child we had holiday dinners on a set of china my mother called the “Beacon” set. This is becasue she said before she and my father were married in 1941 she was given one piece of the set every time they went to the Beacon Theater by the house. She lived on 10 Street off of 36th Avenue. This may have been an opening promotion since the theater opened in June 1940. My mother’s younger sister also confirmed this and she had pieces of the set.

The china set was made by “The French-Saxon China Co, Sebring, Ohio, National Brotherhood of Co-operative Potteries, 22 K. Gold USA”. I researched the patten and I believe it is Fsx 29.

As a child my uncle took my brother and me to the Beacon and I am almost sure we saw Frankinsten or The House of Wax (and one of them was 3D with the glasses).

If anyone also knows of this china set as a promotion of the Beacon Theater, please respond.

I lived in Queensbridge Projects until we moved to California in 1961. I recall, being confirmed at a church on Broadway, but forgotten the name, if anyone recalls the wonderful Italian festival, let me know. Good memories. Linda