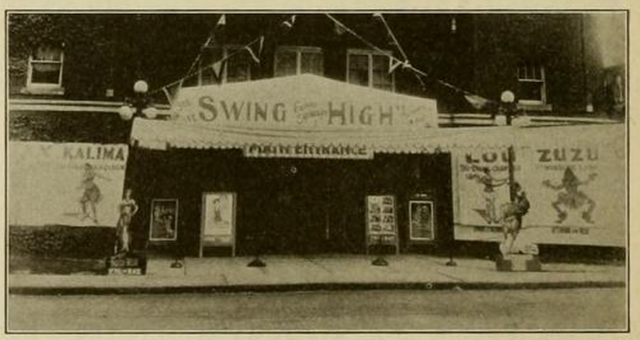 The Fort Plain Theatre was opened on November 27, 1911 as a legitimate theatre and vaudeville house. The opening production was the play “A Gentleman of Leisure” staring Cyril Scott. By 1914 movies were also being screened. It was renamed Mohawk Valley Theatre and was taken over by the Smalley circuit in 1922 and became Smalley’s Fort Plain Theatre. By 1941 it was Smalley’s Theatre.

Smalley’s Theatre was still open in 1957, but was soon renamed the Fort Plain Theatre (again) when it closed in 1964. It was demolished in 1965.

Is this the place that became “Ernie’s Pussycat Theatre” in the 70’s?

An item in a 1958 issue of Motion Picture Herald reported that Michael F. Cory, operator of the Strand Theatre in Canajoharie, New York, had purchased the Fort Plain Theatre from a subsidiary of Smalley Theatres.

I believe this house went back to its original name in its last years. An article in the March 1, 1965, issue of the Amsterdam, New York Evening Recorder said that the Fort Plain Theatre, which had been closed for some months, had been bought by the Fort Plain Merchants Association, and title had been conveyed to the Village Board so that the building could be demolished to make way for a public parking lot.

The house probably closed in the latter part of 1964, and the building was demolished in 1965.

“Dr. Jackson is mainly responsible for Fort Plain’s present theatre. The Fritcher opera house burned on May 4, 1911, which event left Fort Plain without a theatre. The Brunswick hotel, opposite the Jackson home, was burned about 1910. Dr. Jackson’s keen mind at once sensed the availability of the site of the hotel as a location for a theatre. He interested a number of business men and a stock company was formed and the construction of the present theatre was started in the fall of 1911. Dr. Jackson subsequently bought a controlling interest in the company and made his son, Harvey H. Jackson, the manager of the theatre. Later managers were Gros & Zielley, Saxton & Lombard, Saxton & Rickard and V.F. Saxton. The theatre was sold to W.C. Smalley in 1921. Dr. Jackson always maintained a great interest in the theatre. Dr. and Mrs. Jackson nursed the beautiful Boston ivy, which overspreads the northern wall and which is the finest example of this handsome vine in this section.”

The December 9, 1911 issue of Variety reported that the new Fort Plain Theatre had opened November 27 with “A Gentleman of Leisure” starring Cyril Scott. The play was based on an early novel by P. G. Wodehouse, and had premiered at The Playhouse in New York City on August 24. The box office receipts for the Fort Plain’s opening night were $1,800.