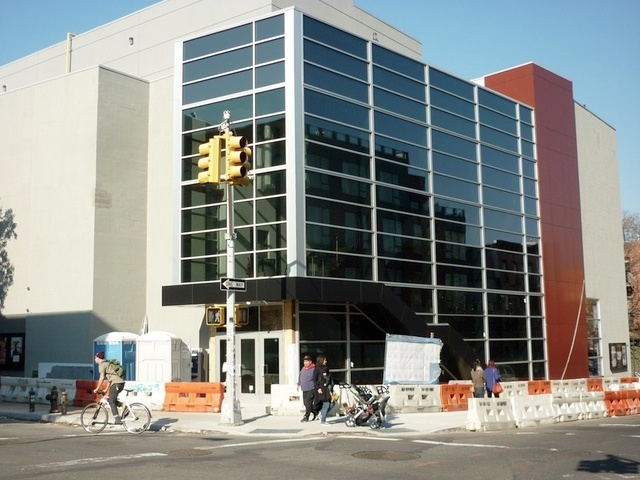 Articles about this theater’s opening can be read here, here, and here.

As one who grew up seeing the remaining theaters of Greenpoint and Williamsburg close until none remained, the opening of this multi-plex is wonderful news. The fact that it will be managed by the same family that runs the terrific Kew Gardens Cinema means that it should be a quality operation. North Brooklyn deserves no less. Good luck.

I wonder why this theater is not yet listed in the newspaper movie clocks.

Very disappointed with the screenings I’ve been to here. The theaters are wide but not deep and in some of the smaller one, the projector is so close to the screen that it messes up the aspect ratio and the picture doesn’t fill the whole screen. On top of that, last night they showed the trailer for the film they were about to screen. I’ve never had that happen ever!

Exterior and lobby photographs from July 2015.

Went here earlier in the year to see a film, upon arrival all of our bags were checked before entry for contraband smuggled concession items, needless to say I had none on me, but I will never return here.

JKR Partners have renamed themselves JKRP Architects. The firm’s web site features two photos of the Williamsburg Cinemas on this page.

I’ve been to this theatre many times. I enjoy going during the early part of the day when it isn’t crowded and cheaper. I also like venturing out to Cobble Hill. I don’t like the design of this building. It’s too minimalist for my tastes.