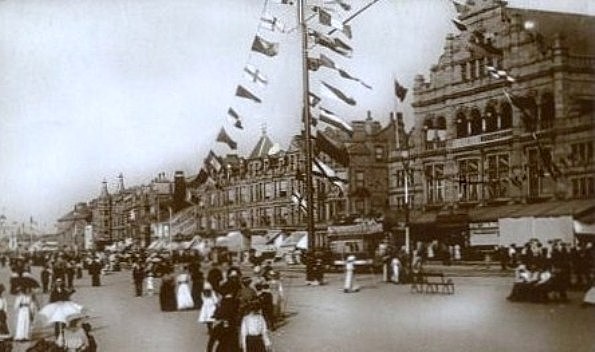 Located on the Promenade at the corners of Regent Road and Lancashire Street, in this Lancashire seaside town. The Alhambra Palace Theatre was opened in 1901 as a music hall, located on the first floor of the building. Other parts of the building contained a market at ground floor level, shops, offices and a restaurant. The proscenium was 29 feet wide, the stage 30 feet deeps and there were 14 dressing rooms.

In 1909, films were being screened, and in 1910, it was granted a Cinematograph Licence. Films were initially screened in the winter months.

It was equipped with a British Acoustics(BA) sound system in the late-1920’s and was re-named Astoria Super Cinema. It now programmed a mix of films and variety shows. The Astoria Super Cinema was closed in September 1939 when World War II began, but unlike other cinemas, it did not re-open within weeks, but remained closed until the end of the war in 1945.

Reopening in 1946 as the Alhambra Palace Theatre, it was in use as a live theatre only. The Alhambra Palace Theatre was used extensively as a location for the filming in 1960, of “The Entertainer” starring Lawrence Olivier. It was closed in June 1970 following a fire in the building. After repairs were carried out to the auditorium, it was converted into a discotheque, which operated into at least 1989. It became the Carleton Club, a nightclub, which also hosted events such as boxing, wrestling and beauty pageants. By 1992, the name on the building was Alhambra Leisure Centre, containing an amusement arcade among its attractions. By 2009, the ground floor was back in retail use again as an antique market. The Carleton Club was closed in 2015 and became the C2 Nightclub. In 2016 it was in use as a live music venue. The building has been sold to be converted into flats, but by 2022, those plans have not materialised.

Are you sure this one has gone?

Ian; Many Thanks for the correction, which I have amended.

i performed with my band at the Carleton club in the early nineties.I was told there was a leslie speaker on the old stage. they showed me up there,and there was the leslie with a pyramid of pidgeon crap on top of it.Then i noticed the bricked up proscenium and a ladder leading up to a small hole in the brickwork.I climbed up and looked through,and there was the remains of the Alhambra complete with the balcony.Stretching into the distance was the false ceiling of the carleton club.Its closed now ,but i guess much the same.

The Alhambra reopened in 2016 as a live music venue, hosting festivals and community events. Only the former stalls floor was restored after the 1970 fire, the upper levels have been abandoned, though the stage and tower were largely undamaged in the fire. There are no flat conversion plans at present.