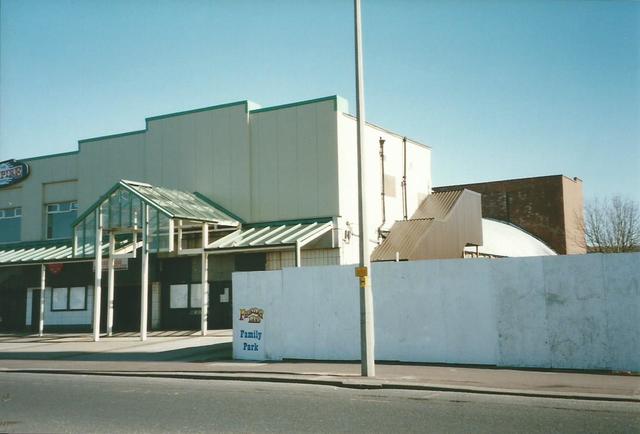 Located on the Promenade in this Lancashire seaside town. The Arcadian Theatre was part of the Floral Hall complex, which was built to the west of Morecambe Railway Station in 1937-1939. Other facilities in the complex were the 1,500-seat Empire Theatre and the 2,200-seat Floral Hall.

The Arcadian Theatre was the last of the facilities to open, and it opened as a live theatre on 16th February 1941. It had a 27 feet wide proscenium. After the end of World War II, it was converted into a cinema, and renamed Arcadian Cinema. It shared the café and dance hall in the complex with the Empire Theatre, which was also in cinema use from 1938. It became part of the Coventry based Orr Circuit of cinemas in the mid-1950’s.

The Arcadian Cinema was modernised in 1970, and was equipped to screen 70mm films. It was only open during the summer seasons. In 1979, it was taken over by the Granada Theatres chain from 18th June 1979, and the seating capacity was reduced to 608. The Arcadian Cinema was closed in September 1982, and was used for storage for many years. The entire complex has now been demolished.

It would appear that the opening date is incorrect, the Arcadian opened as a revue style theatre in 1938/39 and the 1941 date is probably the reopening date after war outbreak closure.