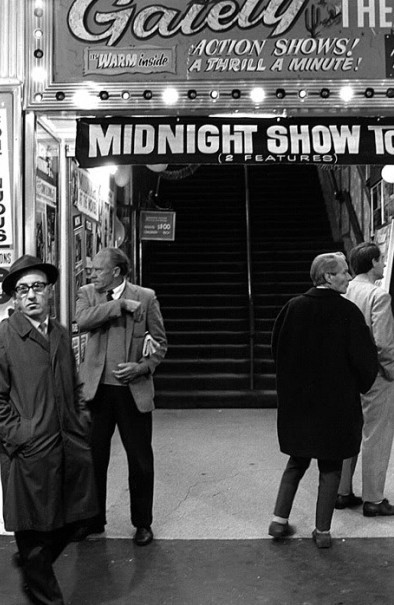 The least known of Sydney’s newsreel theatres was this one in the centre of the ‘sin’ district, just out of the main downtown area. World War II created a huge demand for news and before TV that mean’t film from the seven major newsreel companies.

The King’s Cross Newsreel Theatrette was opened on 25th July 1941. In its early years the King’s Cross Newsreel Theatrette boasted a tall neon sign - needed as the auditorium was upstairs in a two storey building. When demand for news faded the neon came down and the theatre ran conventional double bills, mostly action features, with cartoons and serials.

The theatre made news of its own in 1951 when it took on Sydney’s blue laws. Backed by foreign film distributor Nathan Sheinwald, it ran “The Barber of Seville” - the first time a film had been shown on a Sunday. The big circuits were against Sunday showing but only because they thought it was bad business. “Barber of Seville” ran continuously from 1:30 pm, joined by the Premier Theatre in Surry Hills and was a success. The area produced so much street traffic, especially at evening that the theatre did well. It was renamed the Gaiety Theatre in the mid-1960’s, and continued until closing in 1975. It soon re-opened as as the Penthouse Cinema and ran for a few more years until closing and becoming an slot machine arcade.

It was converted into a KX Fitness and the large bay windows on the frontage were finally uncovered.

The gym is now a boxing gym(Boxing works), a chemist(Crest Hotel Chemist), a convenience store(ezy Mart), and a empty shop(for sale).