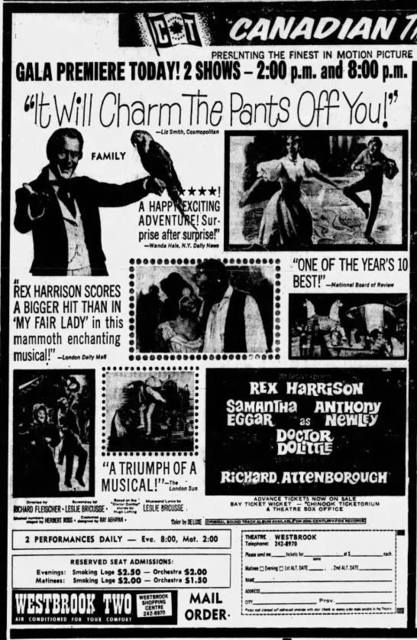 The Westbrook Cinemas were opened by the Canadian Theatres circuit on December 28, 1967 at the Westbrook Shopping Centre in Calgary. Hollywood actor John Ashley, a contract player with American International Pictures later known for narrating the opening montage for TV action series “The A-Team” (as well as work as an executive producer on the show), came to Calgary to attend the Westwood’s grand opening on December 29.

This theatre first opened as a twin theatre with total seating of 1,440, then a third screen was added on December 24, 1973. Reconfigured seating and the added third screen brought the seating total to 1,573, with the first two theatres each seating 420 and the largest screen, Cinema Three, seating 733.

The theatre closed after it was heavily damaged in a fire. Today, it houses a dinner theatre and a nightclub.