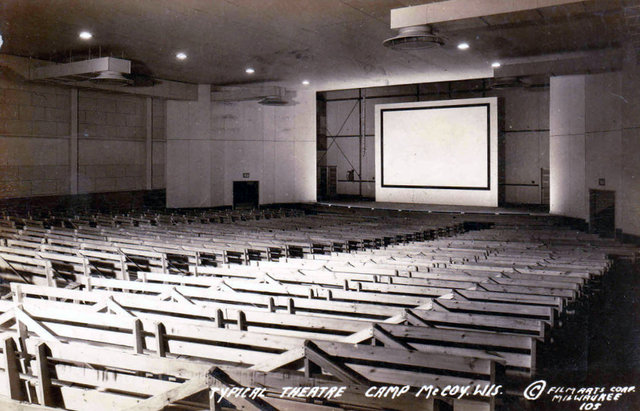 A Historic American Buildings Survey was done in 1988 on the Fort McCoy Theatre (Camp McCoy Building T-1551) approximately 100' West of South Headquarters Road and 100' south of an unnamed road leading to the Base Main PX at Fort McCoy, Monroe County, Wisconsin. Historically significant as a relatively unmodified representative of a military-base theater and one of four type TH-1038-S theaters constructed at Fort McCoy in 1942. Completed on November 4, 1942, the architect was George E. Bergstrom, Chief of the Architectural Unit in the Engineering Branch of the Construction Division, Quartermaster Corps, who supervised the 1941 revision of the 700 series theatre plans that produced the 800-500 series drawings in April 1941. Construction bids were let in February 1942 and contracts were awarded in late-March. The War Department purchased the lumber, and the remaining materials were apparently purchased by subcontractors in the Wisconsin area. The total cost was $72,000. The theatre was built from 800 series plans, except for the use of concrete walls with steel reinforcement in the boiler room in lieu of concrete block and the use of plan 800-515 (Alternative Plan Providing Toilet Facilities for Colored Audience). Two covered entrances and ramps measuring 7'-4" x 13'~0" were added to the east and west walls in 1944.

The construction was part of a massive nationwide mobilization program designed to house and train the expanded World War II Army. The 800 series drawings and the 700 series that preceded it were a comprehensive set of drawings which could be used interchangably in creating the various building types. The 1939 housing capacity of 200,000 was increased to 6,000,000 by the fall of 1944. Construction techniques such as the standardization of plans, prefabrication of units and assembly-line approach to construction were largely pioneered in the construction of these structures. T-1551 was one of four TH-1Q38-S theatres constructed in “New Camp McCoy” as training bases for approximately 525,000 men drafted for Army service after the declaration of war. The Second Army Division arrived in the fall of 1942 and remained until November 1943, leaving for action in the Italian Campaign, The 76th Division then took over, remaining until December 1944, when they departed for service in the Battle of the Bulge and the subsequent occupation of Germany. Troops for engineering, railhead, field artillery, tank destroyer, ordinance, and maintenance were also trained at Camp McCoy. Most functions halted in 1947, but by 1950 Camp McCoy was reactivated for training of Regular, Reserve, and National Guard Units in the Fifth Army Area for service in the Korean War. Since 1953 the camp was a center for training reserve units of the Army and National Guard Regiments of the Midwest Region.

The theater was assigned to Special Services in January 1943; in June 1955 it was assigned to the 438th Army Band. It was deactivated in 1969. Always a well preserved, relatively unmodified example of the typical 800 series TH-1038-S theater, the high rectangular auditorium is abutted to the front by the lobby and the rear by dressing rooms. A 50' rectangular red-buff brick chimney rises between the auditorium and dressing rooms. The clear span of the theater was achieved with a wooden Pratt truss with a shallow-pitched top chord. The roof truss was repaired in 1976 for cracks in five of the seven main trusses. The theater measures approximately 169'-6" in length and 76'-1-½" in width with a height of approximately 25'-1-¾". Of light frame construction, the public entrance has a concrete stoop with a covered porch the same width as the auditorium and contains two ticket booths. Above the single-story porch, the form of the projection room is visible. A small covered entrance vestibule with double doors and a gabled roof protrudes from the single-story dressing-room area. Each side of the auditorium has three openings, each with a different architectural treatment for the porch/stoop arrangement. The double doors at the rear of the auditorium open onto an uncovered concrete stoop with two steps down to grade. In the middle of the auditorium, concrete steps rise from below grade covered by a wooden porch, reflecting the sloped floor of the auditorium, below grade at this point. The outside entrance to the stage itself is through an independent enclosed vestibule.There is no basement.

The theatre as constructed had a gross area of 13,417 square feet with seventeen rooms in the building: the foyer, the lobby, two ticket booths, an office, the auditorium, two dressing rooms with toilets, a men’s toilet, a women’s toilet, a utility room, prop room, rewind room, catwalk, fan room, projection room, and boiler room. Two wooden stairs descend from the side of the stage platform to the auditorium and a wooden stair from the lobby to the projection room.

The finished auditorium floor is poured concrete; the stage is a raised wooden platform. The auditorium and lobby is painted mineral fiberboard nailed directly to the stud frame wall. Walls on each side of the stage provide an off-stage preparation area and form a proscenium for the stage platform. A coal-fired steam boiler was used. Seating was on benches. To the west of the building there is an asphalt parking lot.