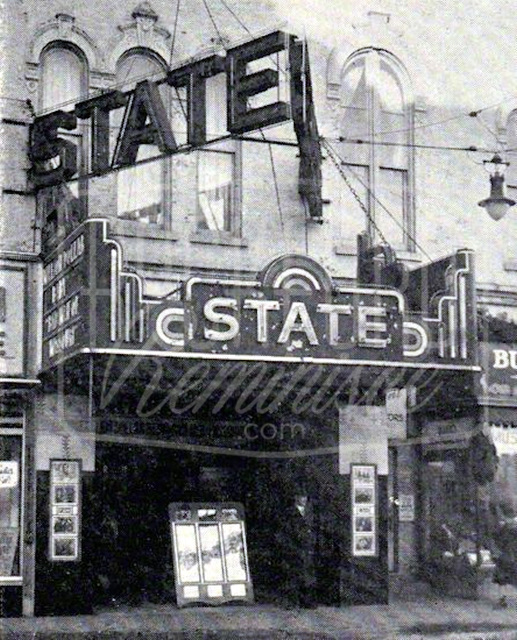 The Palm Theatre opened 1913 and was designed by architect Frank A. Carpenter. It was remodelled in 1917 to the plans of architectural firm Rapp & Rapp. It was renamed State Theatre September 20, 1931. The State Theatre closed by the early-1980s, and has since been razed.

Joseph C. Henricks 1899-1974, employed as projectionist 37 years by the State Theatre, Rockford, (stated in his obit)

The Palm Theatre opened even earlier than the 1920s. One modern source says that it opened in December, 1913. The earliest reference I’ve found in trade publications of the period appears in the July 12, 1913 issue of The Moving Picture World:

“A new company will be formed In Rockford to operate a moving picture show at 105 West State Street. Charles Lamb, manager of the Grand Opera House, will be at the head of the company. The building will be remodeled and an arcade front will be placed. The construction is to be such that the theater can be reached in the summer time from the river front as well as from the State Street entrance.”

The July 26, 1913, issue of the same publication had the first mention of the theater’s name:

“Plans for the new Palm Theater in Rockford, which are now being prepared by Architect Frank A. Carpenter, calls for a departure from moving picture theaters in that city. The Arcade will have a soda fountain, a cigar stand and a candy booth. The operator and machine will be outside of the building, [in a] hut opening into the auditorium. It is also expected to have a roof garden 20x95 feet over the auditorium. The building, which is now occupied by an electric company, will be vacated about the middle of July. The theater will be financed by an organization known as the Palm Amusement Company, and will have a capital stock of $25,000.”

The August 2, 1913, issue of The Moving Picture World had annother announcement:

“The Palm Amusement Company, of Bockford, has been incorporated, with a capital stock of $25,000, to do a general amusement business and to conduct a vaudeville show and music hall. The incorporators are: Charles Lamb, Fred B. Sterling and Fred E. Carpenter.”

In 1917, the Palm Theatre was expanded, as noted in this item from the August 1 issue of The American Contractor:

The September 1 issue of the same publication said that construction of the addition’s walls was underway.

This opened as Palm on December 1st, 1913 as Palm and reopened as State on September 20th, 1931. I uploaded both grand opening ads in the photo section.

I don’t know if anyone will even read this but I’m having a moment of nostalgia. I grew up in Rockford and going to the movies in the sixties was a treat. I wanted to see if I could remember the theater my mom dropped me and my little sister off at – in the dead of winter – in a snow storm – so we could see Song of the South. She left us in line and drove home, expecting to pick us up after the show. Well we got in the LONG line that had it’s ending1/4 way across the river. We stood there and froze only to finally get to the ticket window and find out it was sold out. (mind you were were only 6 and 9!) It was one of the coldest days of my life. I thought I’d come online and see if I could find the place after all these years (left Illinois in 70’s)and even though the theater is gone, I knew I’d found the spot when I saw that portion of the bridge! Wonderful.

There’s a very early photo of the Palm Theatre about two thirds of the way down this web page. The caption says that it closed about 1929, so it could have been dark for a couple of years before being renovated and reopened as the State in 1931. The names of the movies can’t be seen in the photo, so I can’t date it by them, but Billie Burke made her movie debut in 1916, so it has to be no earlier than that.

This history courtesy of the Rockford Reminisce Facebook page. It appears the seat number increased in 1931.

Charles House took ownership of the former Palm Theater in 1931 which had been closed for two years. A contest was held in July 1931 to give the former Palm Theater a new name and more than 1,400 entries were received out of which 400 contestants suggested the name of “State”. Most of the contestants selected State because of the location of the former Palm Theater on State Street and the popularity of the name among playhouses in practically all cities of the country. The simplicity of the name also was advanced as a reason for its choice. The 905 seat State Theater located at 105 West State Street would open to the public on September 20, 1931. “Viennese Nights,” a romantic film adapted to the screen by Sigmund Romberg and Oscar Hammerstein, famous composers, was the opening attraction at the State Theater. Although the opening attraction was a first run movie, it was the plan of the theater to show second runs of all leading productions at reasonable prices to allow more people to enjoy the movies. “Good Shows at Reasonable Prices” was the theaters' motto. As part of the City of Rockford’s aggressive urban renewal program, the State Theater would eventually become a victim in the 1970’s. Theater management hauled out the fixtures of the theater including the popcorn machine after playing the final show, and that ended the enterprise once known as the Palm and State Theaters. The theater which lasted through the depression and the advent of television was demolished in November 1976 to make way for the Luther Center, a high rise apartment building for the elderly.

I visited the STATE Theatre in 1970 and was dismayed to see almost no original ornament.