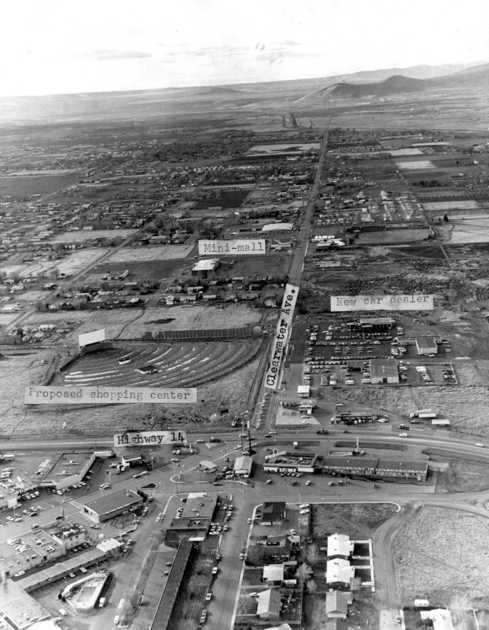 When the town of Kennewick, Washington was much smaller in the 1940’s, it had its own drive-in theatre in an area known as the Highlands, on what used to be the outskirts/edge of the town on Highway 410. Archives for the Tri-City Herald show that the drive-in was opened on March 27, 1948 with Ronald Reagan in “Stallion Road”. It was operated by Midstate Amusement Corp. It then went to SRO in the mid-1960’s. Outside of movies, the drive-in also used to hold church services occasionally.

The Hi-Land Drive-In (also credited as Hiland in movie advertisements) seems to have been built twice, or at least one article in the Tri-City Herald archives states it was rebuilt in the early-1950’s. Another says that its screen was upgraded in that time period.

Eventually, there was interest in the land where the drive-in once was, and it was sold in early-1976 before being demolished that year. In its place would be the Highlands Shopping Center, and the entrance was where Carl’s Jr. stands today.

I got one of the pictures, could not find the other one.

Opened as the Highland Drive-In Theater on March 27, 1948 with “Stallion Road”.