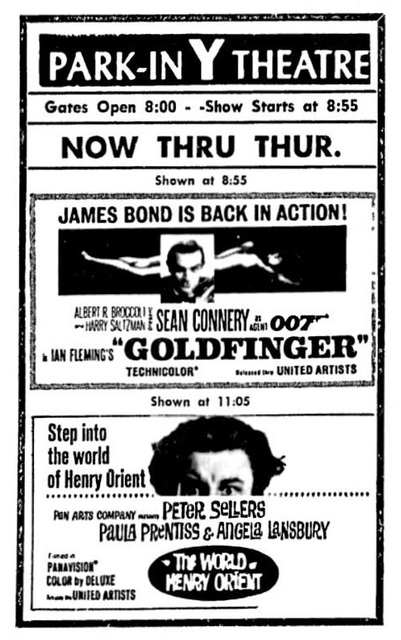 Opening on September 11, 1947, the Park Drive-In in Richland showed “The Great John L. Sullivan”. The drive-in was built by Clyde and Fred Hair of Walla Walla, Washington. As the theater was built in a section near the Columbia River commonly known as the “Richland Y”, “The Y”, or even “Richland Wye” due to the intersection of the rivers, the theater would eventually become known as the Park-In Y Theater.

The theater was part of an obscenity trial when the drive-in showed “Carmen Baby” in 1968. The case went to the supreme court, but in 1972 the case was overturned, in favor of the theater owner.

In the mid-1970’s, the theater once again changed their name, this time to Island View Drive-In, as the section of town was also named Island View in honor of Bateman Island in the Columbia River. The drive-in would continue to do fairly well, but with competition from nearby multiplexes (including the Metro 4 and Columbia Center 3), it started to show age and neglect.

“The Twilight Zone” was the last film shown at Island View Drive-In on September 5, 1983. SRO decided in April 1984 to not re-open, and it was shut down for good. The closed Island View Drive-In would remain there throughout the late-1980’s and early-1990’s before it was demolished for good. An apartment complex is now in its place.

Here is an archived Geocities page, showing photos of what was left of Island View after its closure: http://www.reocities.com/Hollywood/Pavillion/2216/ParkNY.html

I worked at this Drive In as a janitor, field man and eventually assistant manager. This was in 1976 and 1977. My name is John Schoonover.

I tried the link above for photos but it wouldn’t connect. Is it possible to post the pictures for this drive in on the site? Thanks.