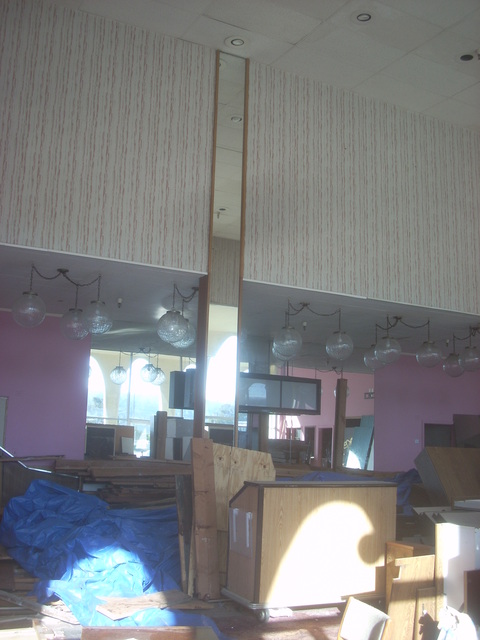 The Hyatt Music Theatre was built a live theatre venue. It became the Hyatt Cinema Theatre on March 29, 1966. It was an “Ultramodern” theater shaped like a big spiked salad bowl with a marquee out front. It screened the roadshow versions of movies in the mid-1960’s. It later became a triplex and was closed in 2008.

I was reading on Loop Net that the Hyatt is Now For Lease, the only thing missing is the seats they have put in folding chairs. It’s AVA starting May 30 th, 2012

Here is an architectural rendering of the Hyatt Music Theatre. The theater was designed by architects Vincent G. Raney and Robert M. Blunk.

Raney, of course, was a well-known Northern California theater architect who designed dozens of movie theaters. Robert Blunk was a Burlingame architect who, as far as I’ve been able to discover, designed only one other house, the Hillbarn Theatre at Foster City, California, (1966) which, like the Hyatt, was a stage venue.

The (single screen) Hyatt Cinema never showed Cinerama films. I saw a production of South Pacific (with Mary Martin) there when it was a theater in the round in the mid 60’s. After it became a single screen theater in ‘67 or '68 I saw Doctor Zhivago there on it’s very impressive large curved screen. After it was twinned I never went back.

By the time I started working there, it was already a two-screen theater. As I recall, 720-seats in the large cinema and 189-seats in the small theater, which we called, “The Abortion.”

It was not well done. There was little sound isolation in the small theater and it was an odd, two-tiered seating configuration.

The large cinema was a delight. It was a very large, curved screen and was set-up for 70mm, 6-channel magnetic sound (although it was never used while I was there) and I don’t think all of the five speakers behind the screen were operational. As I recall, number 2 never worked.

I did borrow a print of Funny Lady from the Burlingame Drive-In one night as it had a 4-channel magnetic soundtrack. We had a crew party and turned the volume up after hours. It sounded pretty darn good (even if the movie was not all that).

A lot of memories there. Sorry to see it in the shape it is now.

The Hyatt may not be with us much longer. A May 5 article in the San Mateo Daily Journal this year reported that plans are afoot to redevelop the property with an office complex and restaurant. The nearby Burlingame Drive-In site is expected to be redeveloped as well, with an even larger office project.

An April 2017 Google map street view shows the theater building still there and just a few weeks ago I drove down the Bayshore Freeway and it is still standing.

EmpressDR: It’s highly doubtful you saw “The Empire Strikes Back” at the Hyatt in May 1980 since it is very well documented that “Empire” opened during that timeframe exclusively at the Northpoint in San Francisco (plus one theater in Santa Clara County and one in Marin County). Everyone else in the Bay Area had to wait at least a month before the movie’s release broadened.

My Father and Grandfather took me to see Grand Prix in 1966, I was only 4 ½. I don’t remember much of the movie, but I do remember the theater being so big. I didn’t know until many years later watching the movie for a second time that James Gardener was driving a 1966 Shelby GT350H with a 4 speed.There is 2 or 3 scenes with the car in the movie. Here’s the funny thing, the night I saw that movie with my dad and grandfather I was driving in a 1966 GT350H with a 4 speed (out of a 1001 made only 85 are 4 speeds). I still own the car today and live approximately a mile from the movie theater.