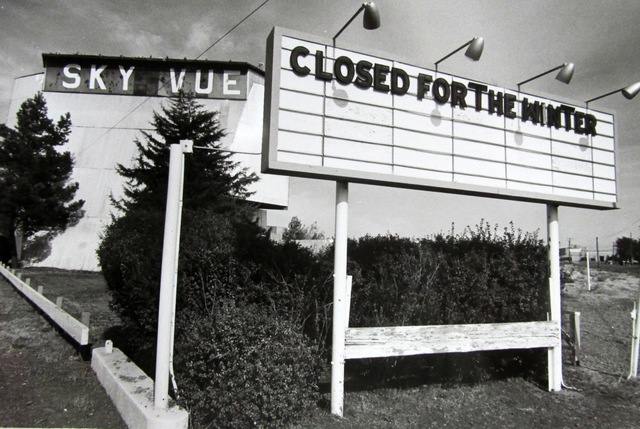 The grand opening night for the new Iris Drive-In was on May 14, 1947, screening the 1945 western “San Antonio” with Errol Flynn, Alexis Smith and S.Z. Sakall. The second feature of the evening was the 1945 drama “Girl of the Limberlost” with Ruth Nelson, Dorinda Clifton and Loren Tindall. Additionally showing was the 1946 short “Baseball Bugs”. The theatre was opened by Gaylord C. Ransom, Fred Brewer, Fred W. Hair and Eldred B. Taylor in conjunction with Columbia Service Inc. In April 1947 Columbia Service Inc. held a contest to name the new drive-in before it opened. Out of 1,888 suggestions submitted, Mrs Judith Work’s submission was chosen as the winner. She picked the name ‘Iris’ because that was the city of Walla Wall’s official flower. The car capacity was 400 cars with stationary speakers located on the parking ramps. One speaker serviced two cars.

In March of 1947, Midstate Amusement Corp. announced plans to build a 600 car drive-in in Walla Walla. Apparently, that did not happen, so in December of 1947 the Iris Drive-In was sold to Midstate Amusement Corp. Midstate at that time was operating the Liberty Theatre, Roxy Theatre, Capitol Theatre and Paramount Theatre. They possibly came to the realization that the city of Walla Walla could not support two drive-in theatres along with four hard-top theatres, and it was easier to buy the Iris Drive-In and update it. Midstate renamed the drive-in to Sky-Vue Drive-In and upgraded the landscaping and projection/sound equipment. On April 23, 1948, the Sky-Vue Drive-In was reopened for the summer movie season under the new name and with the new owners. Before the Sky-Vue Drive-In reopened for the 1951 season, they installed 420 RCA in-a-car speakers to replace the stationary ramp speakers.

In February 1955, a new 55 foot wide CinemaScope screen was installed in front of the old flat screen. On May 1, 1968, Sterling Theatres/Sterling Recreation Organization (SRO) from Seattle WA, took over ownership of all of the Midstate theatres in Walla Walla, including the Sky-Vue Drive-In. In December 1956, SRO sold its 110 movie screens to Cineplex Odeon Corp. from Toronto, Canada. The Sky-Vue Drive-In was part of the deal also, but not the land underneath the drive-in. SRO retained ownership of the land. In 1987 the Sky-Vue Drive-In was leased from Cineplex Odeon Corp. out to Dick Spiess, owner of the M-F Drive-In in Milton-Freewater, OR. Dick’s son Mike was the theatre’s manager. The Sky-Vue Drive-In finally closed for good in September 1992. The drive-in was demolished. The property was purchased by the Port of Walla Walla for a runway safety zone in 1994.

Two blog entries showing newspaper ads for what was shown, as the Iris: http://wallawalladrazanphotos.blogspot.com/2012/07/iris-drive-in-theatre-became-sky-vue.html

then Sky-Vue. Also includes a few photos of the drive-in itself. http://wallawalladrazanphotos.blogspot.com/2011/11/sky-vue-drive-in-theatre-shows-from.html