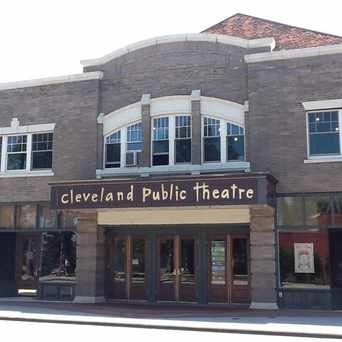 It was taken over by the Cleveland Public Theatre in 1995.

The Cleveland Landmarks Commission attributes the design of the Gordon Square Theatre to architect George Allen Grieble, who also designed the Alhambra Theatre, the Olympia Theatre, and (possibly) the Penn Square Theatre, all between 1911 and 1913. However, an item in the November 3, 1917, issue of The Moving Picture World attributes the house to Arthur C. Yost. The item says:

“Arthur C. Yost, of the firm of Richardson and Yost, Cleveland theater architects, is enjoying a few weeks' rest after his strenuous six years building theaters in Ohio. Mr. Yost planned the Liberty, Mall, Gordon Square, Knickerbocker, Olympic, and other large theaters of Cleveland, and the Pastime, Akron and the Alhambra, Cuyahoga Falls.”

I’m not sure what to make of these conflicting claims. Very little information is available on the Internet about either Grieble or Yost, and the landmarks commission doesn’t cite sources for its attribution of the Gordon Square Theatre to Grieble. Clearing this up will likely require research in publications not available on the Internet, which means somebody with access to the Cleveland Public Library will probably have to do it.

December 25th, 1918 opening as a cinema ad uploaded in the photo section for this theatre.