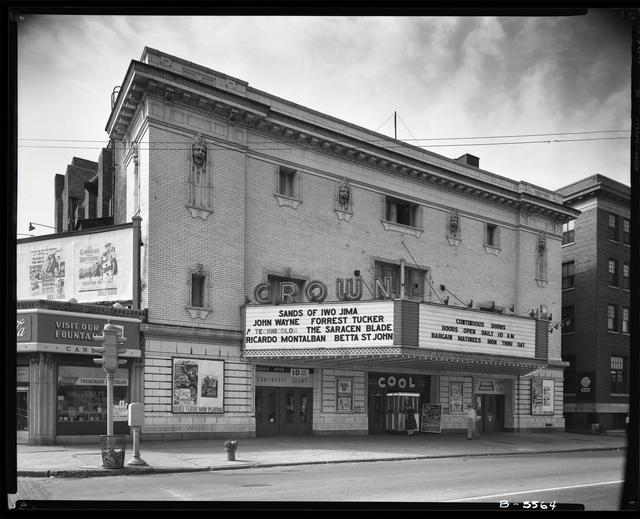 This nearly 1,460-seat theater was opened August 29, 1909, in the Wicker Park neighborhood, on Noble Square. Its auditorium contained a stage, balcony and the theatre designed Art Nouveau style.

Originally a vaudeville house, the Crown Theatre was initially operated by Carruthers & Rickson. On August 19, 1919 it was taken over by the Ascher Brothers circuit. Later, by the time it was acquired by Essaness, it switched over to movies.

That’s it! Thanks yet again.

The Crown was one of the few neighborhood theatres that opened its doors early-very early(at least on Sundays). From the Chicago Sun Times movie directory dated Sunday, August 25, 1957: CROWN COOL! OPEN 10 A.M. Science-Fiction Thrillers! “Giant Claw” & “Night the World Exploded”. The Alvin was another theatre that opened at 10 A.M. -every day- for a number of years. Also- for at least a short period of time- the Crown, Irving, Biograph, and Mode were probably owned by the same company. Each of the four theatres had a black dot to the left of the name.(October 1957).

Hate to get technical but, for the record, the Crown stood empty until the spring of 1963, when it was demolished. Two movies I especially remember seeing here are “Bad Day at Black Rock” in ‘55, and “Will Success Spoil Rock Hunter?” in 1957, right before my family left the old neighborhood for the suburbs.

An earlier post mentioned Palmgren’s Grill across Ashland, which had two spectacular neons to complement the bright lights of the Crown on what was otherwise a nondescript one-story corner taxpayer that is still standing. The sign for the grill itself included neon palm trees, while a rooftop sign for Miller High Life, with the Girl in the Moon on top, was especially impressive, until Miller temporarily retired the girl and removed her image sometime in the early ‘50’s.

Another one-story lunchroom and soda fountain was located on the west side of Ashland, adjacent to the Crown, with a string of billboards on its roof. The billboard closest to the intersection of Division and Ashland typically was dedicated to whatever movie was playing at the Crown.

Along with huge posters for first-run films, I remember that same corner billboard also used to promote championship fights that were shown at the Crown on closed-circuit TV. I vividly recall a display advertising the telecast of the Marciano-Archie Moore heavyweight championship fight in the fall of 1955.

As of 2011-12, the Pizza Hut has been demolished. Workers driving in pylons (fall 2012) uncovered a brick foundation below the surface. One construction guy told me it belonged to the old theatre. He gave me one of the bricks, part of my rapidly growing collection of bricks from demolished Wicker Park/West Town buildings. It was the guy who runs the newsstand across the street (Division & Ashland, SE corner) who first told me about the Crown.

Grand opening for the Crown Theatre was on August 29, 1909 by Carruthers and Rickson. After a ten-year lease lapses, Ascher Brothers takes on the Crown with an August 9, 1919 grand opening that is posted in photos along with Robert Berlin sketch.

John Eberson appears to be the original architect of this theatre.

The Crown was originally built for William Wieboldt, whose Lion Department Store was adjacent. It was designed by John Eberson - the giant faces on the facade were a signature of his early work.