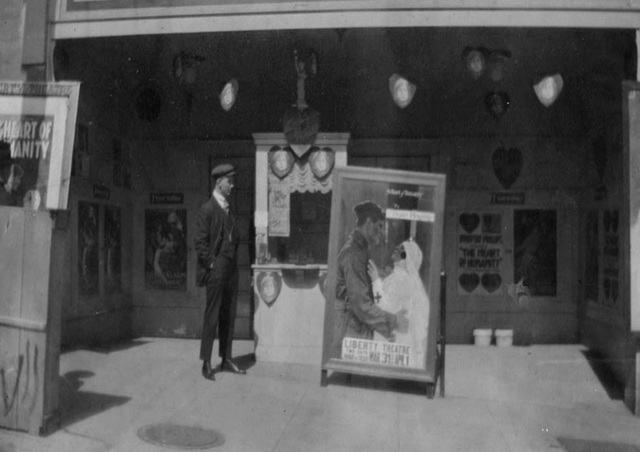 Originally opened as the Electric Theatre in 1912. Photos show its existence in late-1917 as the Liberty Theatre.

Two photos of the Liberty Theater, from 1917: http://historichoodriver.com/index.php?showimage=199

The Liberty Theatre was established by Judson Herbert Ferguson, according to his biography in volume 2 of History of Oregon, by Charles Henry Carey. It probably opened before 1913, in which year it was called the Electric Theatre. It was in 1913 that Arthur Kolstad arrived in Hood River to take over management of the town’s two movie theaters, the other being the Gem at 103 Oak Street.

This house was still called the Electric Theatre in the 1917 City Directory, and must have been renamed the Liberty later that year, when the United States entered the World War.

In 1921, Ferguson and Kolstad built the Rialto Theatre, Hood River’s largest movie house, at 406 Oak Street. The Gem apparently closed at that time. This house continued to operate as the Liberty Theatre at least as late as 1928. I’ve been unable to discover when it was renamed the Cascadia.

Considerable biographical information about Arthur Kolstad can be found in the NRHP registration form for Cliff Lodge, which he once owned. It is available as a PDF at this link. A Google Documents version can be read online at this link.

The 1940 edition of the Film Daily listed the Cascadian as a portable theatre with a seating capacity of 400.