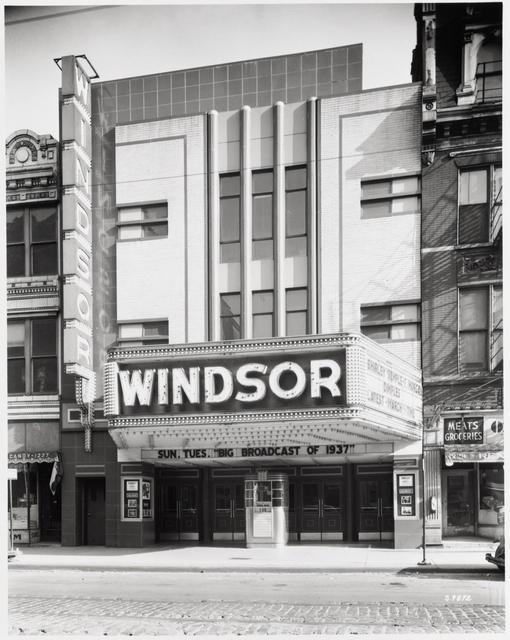 The Windsor Theatre was opened September 20, 1886. The theatre suffered two major fires, and was rebuilt in 1914, opening as part of the Lubliner & Trinz circuit on May 9, 1914. It was one of the earliest projects from the architectural firm of Rapp & Rapp. The theatre was later run by the H & E Balaban chain. It was located on N. Clark Street near E. Division Street, in the Gold Coast neighborhood.

Today the site is occupied by condominiums and retail.

The principals of Pereira & Pereira, the firm that did the 1936 remodeling of the Windsor Theatre, were William Pereira and Hal Pereira. Percival Pereira was an older architect who was never a member of this firm.

I used to go to the Windsor when I was a kid in the “old neighborhood”. Saw “Imitation of Life” with Lana Turner and the whole audience was sobbing at the end. LOL. Was also there the last day it was open – they had a really bad magician on stage.

Movies I saw at the Windsor;

We would walk to the Windsor on Saturday afternoon.

Does anyone have any photo’s of the outside…or the inside?

The Chicagology page has one exterior photo. Copy & paste to view.

An article about the closing and impending demolition of the Windsor Theatre appeared in the May 14, 1961, issue of the Chicago Tribune (Tribune archives.) The original Windsor opened on September 20, 1886, and later suffered two major fires. It was after the second fire that the house was rebuilt and reopened as a movie theater in 1914.

Looks like this would have been one of the earliest Rapp & Rapp theaters with a cantilevered balcony.

Here is a THSA photo of the art deco exterior.

Article. There are plans to move the archives to newspapers.com.

Circa November 1935 photo courtesy David Sadowski in below link. Scaffolding for then upcoming art deco facade completed by 1937.