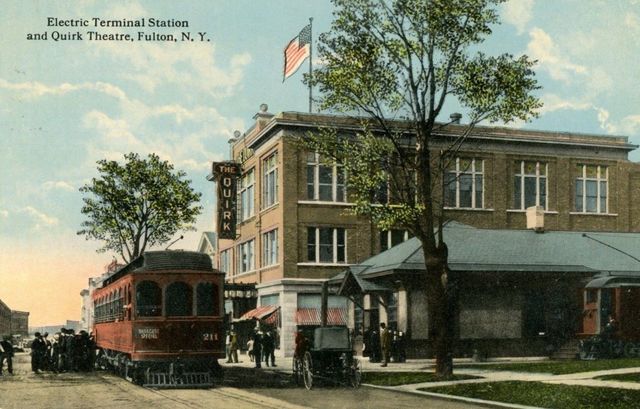 Listed in Film Daily Yearbook’s;1941 and 1943 with a seating capacity of 1,100, the State Theatre was operated by Paramount Pictures Inc. through their subsidiary Fulton Enterprises Inc.

For the second consecutive weekend the State theater in downtown Fulton was the target of vandals, according to city police.

Also damaged was one of the letters in the marquee. Police said the waitresses at the pizza shop next door to the ctheater cleaned the broken glass and smashed apples from the sidewalk. According to police, the theater marquee had been damaged a week ago.

Here is a pile of rubble that used to be the State:
http://tinyurl.com/y3rxun

Quirk Theatre is definitely an aka for the State. This page of Fulton postcards at Rootsweb includes one showing the Quirk Theatre. It’s recognizable as the State’s building, and the card looks to be from the 1920s or earlier.

The July 22, 1968, issue of Boxoffice said that the State Theatre building had been taken over by the City of Fulton for non-payment of taxes. It was by then the only movie theater in Fulton, and city officials said they wanted to keep it open by any means short of actually operating it.

Various issues of Boxoffice from 1943 into the 1950s say that the State was a unit of the Oneida-based Kallet circuit. A June 8, 1964, item refers to the State saying it “..had been operated by Kallet.”

I’ve found the Quirk Theatre mentioned in issues of the Fulton Times as early as April, 1913. I haven’t yet found an article about the opening of the theater, but there must be one. An article in a 1989 issue of the Oswego Valley News said that the Quirk Theatre had been built “…just before World War I….” The house was built by a prominent Fulton citizen, Edward Quirk, who also served at least one term as the town’s mayor.

The September, 1912, issue of trade union journal The Lather listed a theater project at Fulton in its construction news column. The architect for the project was Leon H. Lempert. As the local newspapers give no indication of any other new theaters opening in Fulton around this time, the project was almost certainly the Quirk.

The name State Theatre first appears in the local newspapers in 1935. The October 31 issue of the Fulton Patriot said that the renovated theater had been opened the previous night.

In 1941, the theater was more extensively remodeled. Congratulatory ads placed in the June 20th Oswego Palladium-Times, another local paper, included one from the Belgian Art Studios in New York which said that all the murals and other decorations in the remodeled theater were by Oscar Glas.

As a kid was the theatre I went to many times. It had a wonderful art deco interior. I have written about seeing Scary Movies there on my blog

It was a shame when it was torn down.