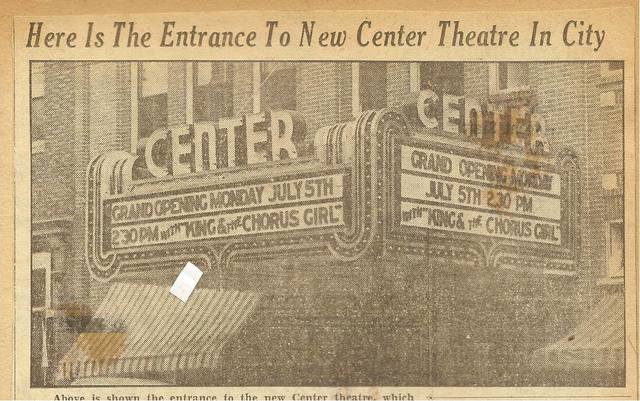 The Center Theatre was opened July 5, 1937 with Fernand Gravat in “The King and the Chorus Girl”. By 1941 it was operated by Paramount Pictures Inc. through their subsidiary Wilby-Kincey. It closed on February 9, 1963.

The Center lasted well into the 1960s. When the Blue Laws relaxed their grip on movies being shown on Sundays, I went to the Center with some cousins circa 1962 or 63 and saw “Journey to the Center of the Earth”. The Center was a decent second-run house for Greenville.

This opened on July 5th, 1937. Grand opening ad in the photo section.

The Center Theater was located at 222 N. Main Street, just two doors down from the Paris Theater. It accommodated live stage shows as well as films, and as late as the early 1950s a ticket would sometimes admit you to a performance by a Grand Ole Opry star as well as the day’s feature. Typically this would tie in with a morning event at Mary’s Record Shop, 630 S. Main Street, where the touring country music artist would promote his records. According to my notes from the Greenville News, Hank Williams appeared on stage at the Center Theater on 11 October 1950. At the time, he was an increasingly popular musician, but perhaps no one anticipated the pop culture phenomenon he would eventually become.

The Center Theatre closed on February 9, 1963 as the city began an urban renewal program. The marquee was removed just days later with the theatre dismantled. The auditorium floor was leveled becoming a clothing store.