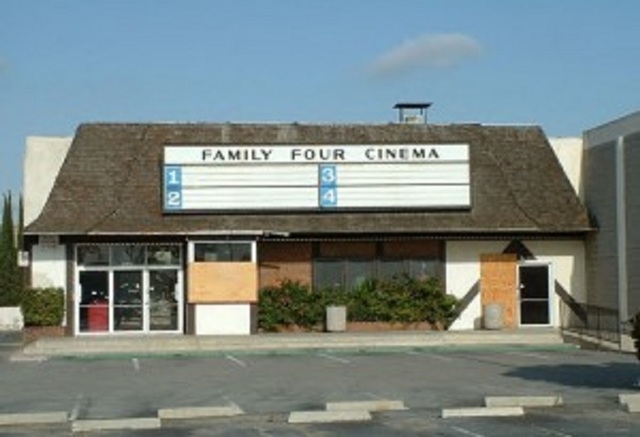 The California Cinema Circuit opened the Family Twin Cinema on September 14, 1973. On the screens were two 1970’s icons: A Billy Jack double feature in one auditorium and in the other, a rising Burt Reynolds in “White Lighting” and a fading Burt Lancaster from an earlier era in “Scorpio".

In 1984 it became the Family 4, as listed in the Los Angeles Times Independent Theatre Guide. The Los Angeles Times reported on January 17, 1988 that Orange Coast Cinemas had spruced up and opened the Family 4 Theatre 18 months previously. The principals were Joan Edwards Randolph, James Edwards III and Carole Ann Ruoff. They had rented the second-run fourplex from James Edwards Sr. Their purpose was to gain hands-on experience in running a theater. (Perhaps the cinemas could have been named Movie Theater University).

Randolph said that the $2 theater was gaining a following and turning a small profit. A comment of Edwards Sr. was: “They’re doing fine, It would be stimulating if they were competing (with the family chain). Everyone else is. Why not them, too?” The Family 4 was just a mile and a half away on Brookhurst from the Edwards Twin Theater in Fountain Valley and was listed in the LA Times Independent Theatre Guide.

In 1993 the students may have been awarded their PhD in Movie Theater Management by Professor Edwards because the Family 4 returned to the fold and became officially an Edwards Theatre.

The Orange County Register on August 24, 2000 published a report of closed Edwards Theatres. The Family 4 had closed on April 27 and the site is now home to a Sam’s Club.

The Family Four was a little run down but a decent place for broke neighborhood kids like me to camp out in all day long. There were lots of second run double features and a fair amount of hard core slasher flicks which always seemed odd for the Family Four.

If you were into Fulci in the 80s and Nazi exploitation in the 70s this was the place that played ‘em in OC. I remember seeing Benji then me and my buddy sneaking into the next door theater and seeing hot blonds with pig tails getting whipped by Nazis. I always thought it may have been Love Camp 7.

I used to work at this theater in the early 80’s. I’ve been searching the web for photos, but there are almost none. It was owned by the Isreal family when I worked there, (they added 2 theaters to the original Twin cinemas) but they later sold out to Edwards. The place closed in the late 90’s and sat empty for a few years. I’m looking for more information and pictures. (Please help!) Purple Rain was the big movie when I first started there and the theater was packed every night with Prince fans; lots of girls, which was fine with me! I met my first girlfriend there while at work. Contact me if you have any info or pictures at

We have some posted over at Cinematour, if you haven’t seen them. 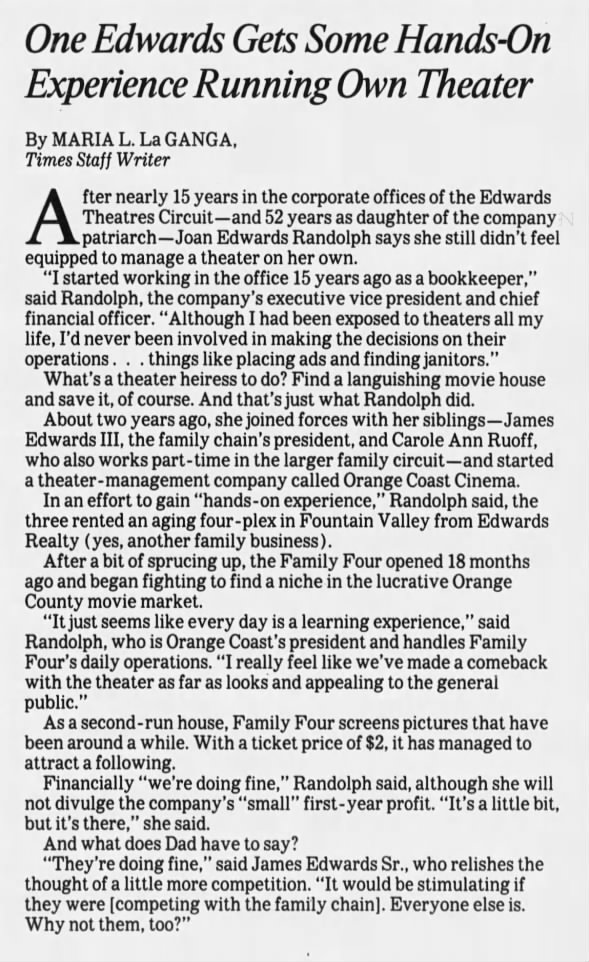