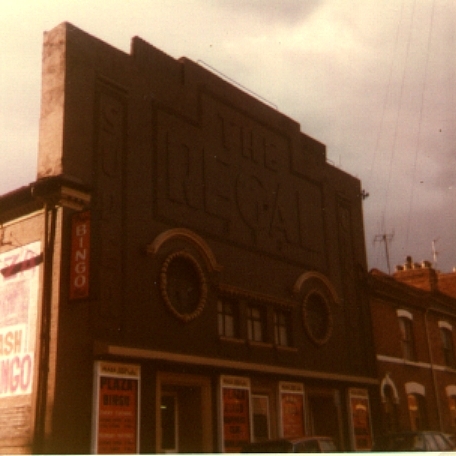 The Vaudeville Electric Theatre opened in Grove Road, just off Kettering Road, Northampton in early March 1920. It was a conversion from a former chapel. The manager was a Captain W. H. Richards. The projectors were manufactured by the local engineering firm, Bassett-Lowke. Redesigned in 1929/30, it reopened in March 1930 as the Regal Super Cinema with a reconstructed frontage. In 1931 the proprietor was Mabel Norfolk and the cinema claimed to have 1,000 seats. In 1945 it became part of the Southan Morris circuit before being taken into the Essoldo fold in 1954. Following closure on 25th February, 1956, it re-opened, now equipped with CinemaScope, and renamed the Essoldo on 13th March 1956 showing Trevor Howard in “Cockleshell Heroes”.

The Essoldo closed on 3rd August 1968 with Richard Todd in “The Dam Busters” and Kenneth Moore in “Reach For the Sky”. A few days later it re-opened under the control of the Cipin brothers who had recently closed the Plaza Cinema on Wellingborough Road. The re-opening films at newly re-named Cinema were Fred MacMurray in “Follow Me Boys” and “Geronimo’s Revenge”. A bingo club licence was soon granted and films were gradually reduced to screenings on school holidays. It was then known as the Plaza Bingo Club.

Following the end of cinema and bingo, the place was gutted to form a skateboard centre and roller disco, then a laser games centre and gymnasium. At this time, the letters ‘PER’ and ‘EMA’ could still be read on the front, a leftover from the Regal modifications. When all this ceased, a local builder purchased it and converted the whole building into a residential development known as ‘The Plaza’, with a restored façade, including the carved ‘Programme’ feature above the central ground floor window. Sadly, the stained glass circular windows disappeared during the refurbishment. The premises have been occupied since completion in 2006.