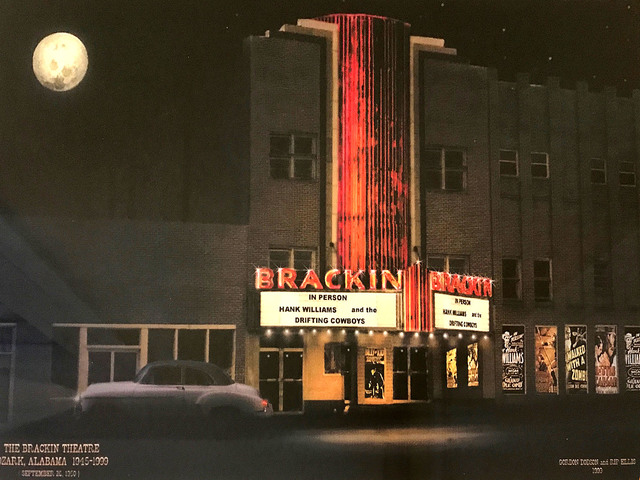 The Brackin Theatre was opened on October 26, 1945 with Joseph Cotten in “Love Letters”. Hank Williams performed at the Brackin Theatre in 1950. It was part of the Brackin Theatres chain in the early-1960’s. They headquartered in Ozark, AL. Walter J. Brackin was president and film buyer. The manager was the euphoniously named Nell Jewel Howze.

I think we must have the wrong address for this theater. The 400 block of Broad Street is entirely residential, except for one church, and the houses look fairly expensive. It seems very unlikely that a theater would have been located among them. CinemaTour has the Brackin Theatre at 446 W. Broad, but west of town the street name changes to Andrews Avenue, so that might not be right either, unless the street names have been changed since the source for the address was published.

In the business district, Broad Street is called North Court Square, adding another layer of confusion. The Brackin Theatre might have been in that neighborhood, although if Google is to be believed, the numbers are totally screwy, with a jump from one and two digit addresses in the block east of Union Avenue to 300 in the block west of Union Avenue (and how did there come to be a street called Union Avenue in Alabama?) It’s very confusing.

The 1947 obituary of Walter J. Brackin can be found on this page. It says that he came to Ozark in 1935 and took over the local movie theater. In 1937 he built a new theater, and in 1945 yet another, even larger. As we have the Brackin listed with about twice the seating capacity of the Dale, the Dale must have been the 1937 house and the Brackin the one built in 1945.

Although the current Dale County courthouse was built in 1969, the square block it is on was already public land. An earlier courthouse stood on the block from 1902 to 1968. The Brackin Theatre, which wasn’t demolished until 1999, must have been somewhere else.

It looks like the Brackin Theatre closed in the 1970s. This web page about the Flowers Center for the Performing Arts (you’ll have to click on the “more” link) says that the building had been vacant since the 1970s when it was reopened to be used for Carroll High School’s musical productions in 1982, 1983, and 1984.

A former resident of Ozark has informed me that the Brackin Theatre was located at what is now 176 Andrews Avenue. That entire block is currently the location of a CVS pharmacy and its parking lot. The theater was still in operation when he moved to Ozark in 1971.

Ozark did renumber its lots some years ago. However, it appears that Google Maps has not discovered the change. It mis-locates the correct modern address several blocks west of its actual location (Bing Maps gets the right block, at least.)