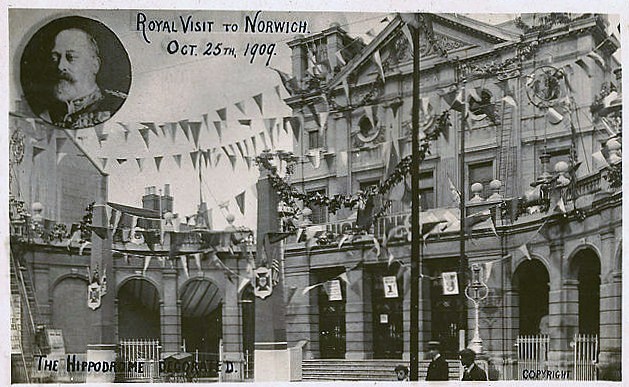 The Grand Opera House was opened on 3rd August 1903 with a production of “The Country Girl”. Designed by noted theatre architect W.G.R. Sprague it was a magnificent building, designed in an Italian Renaissance style. It was re-named Hippodrome Theatre within a year. Films were soon being screened as part of the variety programme. It was part of the Bostock Theatres chain. In December 1911, it was granted a Cinematograph Licence, although it was not operating as a full time cinema.

By 1925, it was presenting revues, music hall, variety and dramas. In 1931, it was equipped with a Western Electric(WE) sound system, and was converted into a full time cinema from 30th September 1931, when Ronald Colman in “Condemned” became its first talkie film to be screened. The cinema also boasted a café, for the convenience of its patrons. It was taken over by the Associated British Cinemas(ABC) chain in the summer of 1932, and was operated through their Regent Circuit. The Hippodrome Theatre was closed as a cinema on 4th September 1937, and was leased to become a variety Theatre. In 1939 it became a Repertory playhouse for a short while, before returning to variety shows. This was a short lived venture, and it returned to cinema use, again operated by ABC. It was closed completely in April 1942 when it was severely damaged by German bombs, which killed the theatre manager, his wife and a sea lion trainer.

Repairs were carried out soon after the end of World War II, but the seating area in the gallery was kept closed. By 1948, it was again operated by the Butterworth Theatres chain. It became a Repertory theatre, renamed Norfolk Playhouse, but in late-1957, it returned to cinema use until 27th April 1960, when it was finally closed for ever.

The building stood empty until 1964, when it was demolished, and St. Giles car park was built in 1966, and continues to operate on the site.