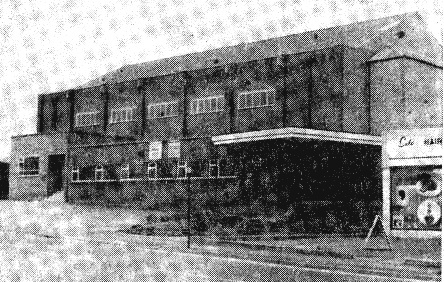 The Ritz Cinema opened on September 4th, 1937, with a charity screening of “Sweet Aloes” starring Kay Francis. Built for W. Harris and P. Faulkner (H&F Cinemas, Welford Road, Northampton), it was designed by Sir John Brown and A.E. Henson. A single-tier auditorium with 728 seats, it was equipped with Kalee 11’s (Indomitables), Kalee Arcs and RCA Photophone sound. The chief projectionist was Fred Irons.

By 1947 it was part of Midland Super Cinemas, which also controlled the Plaza Cinema and Tivoli Cinema in the town. In 1949 it was sold to Sydney & Myer Cipin. In 1954, the local paper reported it as being the first cinema in the town to have installed CinemaScope and stereophonic sound.

Closure came on 6th October 1962 with Dave King in “Go To Blazes” and Howard Keel in “Armoured Patrol”. Bingo was tried for a while, but this ended, with members being transferred to the Plaza Cinema, on Wellingborough Road, also operated by the Cipin brothers. The Ritz Cinema was sold and used as offices and commercial space for storage.

In 1976 the Chronicle & Echo newspaper reported that planning permission had been granted to turn the empty property into a multi-purpose church. Following refurbishment and external tiling, the former Ritz Cinema continued to function as Kingsthorpe Methodist Church, although the shape of the building betrays its cinematic heritage. It was closed in January 2016 when the church vacated the building due to structural problems. It was awaiting demolition in July 2021.

The building has structural problems so the church plan to demolish it and build a new one. Last service held on 7 February.