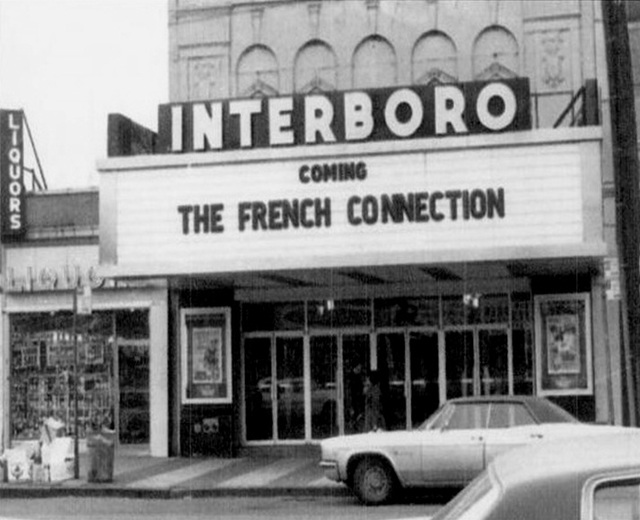 The Interboro Theatre was located at 3462 East Tremont Avenue in the Throggs Neck section of The Bronx.

The theatre was built in the late-1920’s and was originally named the "Interborough". The planned expansion of the Interborough Rapid Transit (IRT) from Hugh Grant Circle in Parkchester never materialized, but the theatre kept the name eventually dropping the "ugh". To local residents the Interboro was called "The Itch".

The first movie ever shown was "Seventh Heaven" (1927) and the score was provided by a pianist named Bertha Benedict. The "Itch" would also host amateur nights, Duncan Yo-Yo competitions, variety shows and talent competitions. The theatre also held dish night for the ladies and PAL Christmas parties.

This beautiful local theatre was one of the hearts of the Throggs Neck community. My parents and grandparents enjoyed the theatre just as I did growing up in this Northeast section of The Bronx.

I remember seeing the first "Rocky" at the Interboro when it had just one screen and a massive ceiling. The theatre was split into four auditoriums on August 3, 1979 and it finally closed on August 1, 1996.

Today, it houses a food market and administration offices for the local Board of Education. An absolute shame.

During the 1950s, on Saturday, any of the kids, who got to the movie before 9AM, go in for 9 cents.
We stayed there most of the day, seeing 2 full movies, cartoons and serials such as Superman. Flattened popcorn boxes were flying toward the screen the whole time. Pop corn was a dime, candy bars and soda. The soda from the machine poured into a cup, which had to be watched carefully, because the cup tended to land slanted and half of the soda would be lost. The bathrooms were up a very narrow stairway. Sitting near the girls and teasing them was fun.

When Street View was made (2007) this theater building was still standing. Satellite view (undated) shows the auditorium roof, too. Has it been demolished since then? Scavello’s Market is still listed at this address on multiple web sites.

Current Google street and aerial views show a large building at this site – doesn’t really look like a theatre. At any rate, there are windows throughout so if it was, it looks like it was completely gutted.

i have lived in the neighborhood that the Interboro serviced my entire life and the reason it closed is simple. although the theater did good business UA which was running it at the time of its closure had no desire to to spend the $$$ to upgrade it.