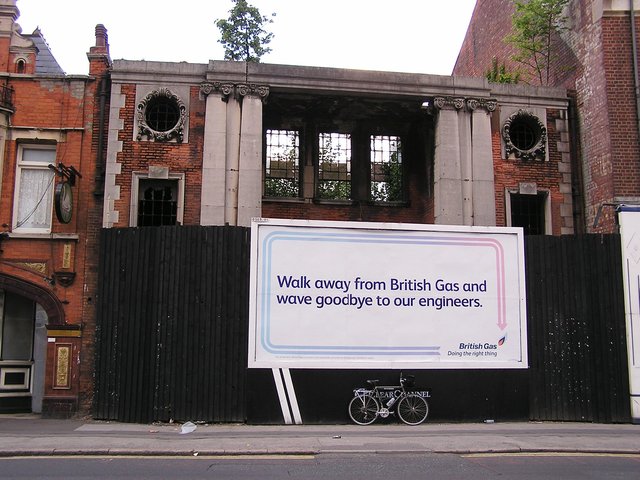 Located in Hull, Humberside, to the north of the city on Beverley Road at the corner of Fountain Road. Opened on 23rd December 1914, the National Picture Theatre was a long and fairly narrow cinema. It had a handsome facade in redbrick, dressed in Portland stone. There were 1,050 seats in stalls and balcony levels. The proscenium was 24 foot wide, and to begin with there was a resident orchestra. In 1923 it was equipped with a Fitton & Haley 2 manual ‘straight’ organ. Western Electric(WE) sound was installed in 1930. The cinema was run in conjunction with the Theatre de Luxe (later the Cecil Theatre), and was a comfortable and popular cinema judging by contemporary accounts.

Whilst the Cecil Theatre’s remains were cleared in 1953, the derelict ruins of the National Picture Theatre lingered on. In February 2007, they were Listed Grade II as an historic building by the Department of Culture, Media & Sport, as one of the last relics of bomb damage remaining in the UK. Only the facade and parts of the foyer remain. Heritage Lottery funding of £11,200 has already been granted.

Plans were announced in March 2019 that £500,000 would be spent on the facade being stabilised and restored and that the empty space where the auditorium stood will be roofed over to create an education centre and war memorial, subject to approval of a further £289,000 funds from the Heritage Lottery and £188,000 from the local council. Completion of the transformation is expected by September 2020.

That’s a great idea for this site as I’ve just watched a BBC2 programme called The Blitz in which this cinema was mentioned.

I have loaded a picture of the cinema in better times