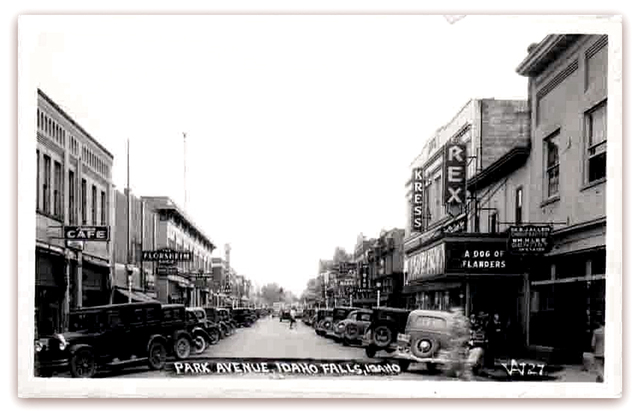 The 1934 Golden Jubilee edition of the Post-Register says that the Centre Theatre was called the Rex Theatre when it opened in 1913.

It was called the Falls Theatre from 1952 into the mid-1970’s, when it was operated by DeMordaunt and Drennan. Since 1993, the Centre Theatre has been operated by Kent and Ingrid Lott’s Royal Theaters.

In 2002 new seats were installed in the Centre Theatre as well as the local Paramount Triplex, which they also operate. What lies beneath its relatively modern facade is anyone’s guess. When in town be sure to check out the Colonial Theatre and Rio Theater.

From the mid 1930s a photo postcard view of Park Avenue along with the Rex Theater in Idaho Falls.