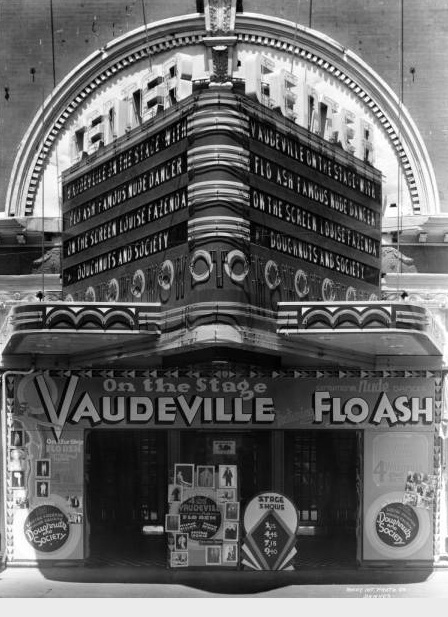 When the original Victory Theatre closed near the end of the 1930’s, its operators took over the Center Theatre on the opposite side of Curtis Street and renamed it the New Victory Theatre. The house had opened on December 23, 1907, as the Majestic Theatre.

The Majestic Theatre had been designed by architect Robert Willison, who shortly after would design Denver’s Municipal Auditorium. Willison chose a playful interpretation of the Baroque style for the facade, augmenting it with a pair of Russian style onion domes atop the side bays flanking an ornate parapet.

In its early years the Majestic Theatre was operated under lease by the Sullivan & Considine vaudeville circuit, and in 1911 the owners of the theatre allowed it to be renamed the Empress Theatre, to conform with the other major houses in the chain. When the Sullivan & Considine circuit collapsed in the mid-1910’s, the Empress Theatre was one of the theatres taken over by Alexander Pantages.

For about a decade, the Empress Theatre presented Pantages vaudeville, and though the name Empress remained on the theater’s vertical sign, smaller signs reading Pantages Vaudeville were added at its base. These remained until the house was taken over by Publix Theatres in the late-1920’s.

By the mid-1930s, the house had been renamed the Center Theatre, and by 1940 it had become the New Victory Theatre. In later years, a new marquee displayed only the name Victory. As Curtis Street declined, the Victory Theatre struggled on, presenting burlesque shows and running adult films through its last years. In 1969, the Victory Theatre surrendered, and shortly after, the house was demolished as part of an urban renewal project that destroyed the last vestiges of Denver’s once vibrant Theatre Row.