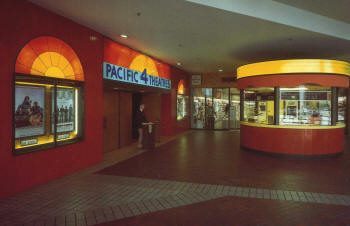 The Pacific 4 was a small multiplex located at the top floor of the old Sherman Oaks Galleria. It opened December 5, 1980 and closed when the mall shut down for major renovations in 1999.

Was this the theatre used in the film “Fast Times at Ridgemont High”? And was this the same mall used in the closing scene of the movie “Valley Girl”?

Yes, this was indeed the theater that was used in the film “Fast Times At Ridgemont High.”

I lived in the Valley in Van Nuys during the early 80’s while I was attending LA Valley College and I used to haunt this theater quite a lot during that time. I used to come to this mall with my roommates and play the video games in the arcade here, and I saw a lot of great films at this theater, among them Raging Bull, The Road Warrior, Excalibur, and yes…Fast Times At Ridgemont High!

When the theater and Galleria mall showed up on screen in the film itself, the audience I was part of broke out laughing. Talk about life imitating art imitating life! There’s even a brief clip in the film of the video arcade, too!

Thanks. I remember running that film way back in 1982.

This opened on December 5th, 1980. Grand opening ad in photo section posted by someone else.