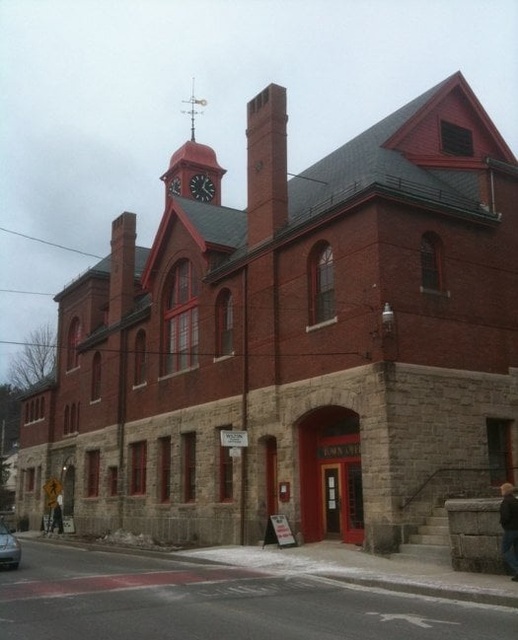 The History of the Wilton Town Hall Theatre:

The Wilton Town Hall Theatre, built in 1886, is owned and operated by Dennis Markaverich. It was first used as a play house for traveling shows and vaudeville. One can still see the original stage that actors used in the late-1800’s. It was then converted in 1912 to a silent film house. Its popularity boomed as sound was introduced, and World War II hit, as it was the only local theatre to provide current newsreels.

In its migration to the technological films of today, it boasts 2000 watts of light for a bright, crisp picture. As larger "multi-plex" turn their bulbs down to conserve power, we strive for the best picture show possible and keep them at full power. The "Big House" seats 250 patrons in comfortable, well spaced seating. The Town Hall Theatre’s sound system is a full four channels of digital surround sound with New Hampshire’s exclusive 1,000 watt sub-woofer enhancement.

The "screening room" is a small, 63 seat theatre that was converted from the original vaudeville actors changing room. It features a large screen and excellent, no strain viewing for comfortable film enjoyment. It’s received its nick name as it closely resembles a Hollywood studio screening room.

The movie going experience is rounded out by fresh popped popcorn and real butter, not the bagged popcorn and stale peanut oil other theaters offer. The movies played at the Wilton Town Hall Theatre are typically more intellectual and "artsie" type films only found close to Boston. We are sure to card minors to make the "R" rated and "Unrated" movies free of giggling teenagers.

This is a great old place. While they do show the occasional blockbuster (ie Shrek) they mostly show the “artsie” films as mentioned above which is great since it can be difficult to find such films in southern New Hampshire. They also have a nightly movie trivia question and the correct answer wins you a free ticket.

Another article on 100th birthday. (The building is even older)