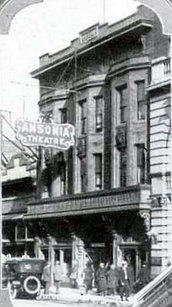 On June 19, 1966 the Montana Standard published a photo of the former theatre being demolished to expand the Miners Bank’s parking.

The Ansonia Theatre is at upper left in this montage of Butte theaters published in 1915.