Capitol Center for the Arts

Capitol Center for the Arts (Official) 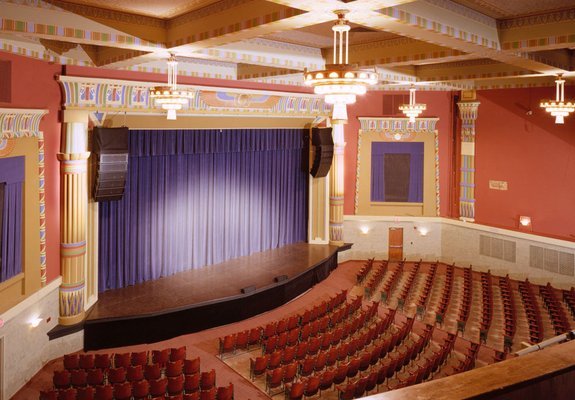 I read elsewhere that this theater was once property of the Masons. Anyway, here is the history from the website:

Opened in 1927, the Capitol Theatre was a prime stop on the Vaudeville circuit, and, later, Concord’s premier movie house and concert hall. Over the years, however, the theater slipped into disrepair and in 1989 it was closed.

With $4.2 million raised in support by the newly formed, non-profit Capitol Center for the Arts, and 250 volunteers contributing over 3,000 hours to paint and restore the Egyptian-motif artwork, the renamed theater was opened in November 1995. The Chubb Theatre was named in recognition of the project’s largest benefactor, Chubb Life.

The 1,307-seat theater is now equipped to present many of today’s lavish Broadway shows. It has been modernized with new heating, air conditioning, electric and plumbing systems, handicapped accessibility including an elevator, a new lobby and vestibule, computerized box office system, updated backstage facilities and restored seats.

The Capitol Center’s mission is to be a resource for the entire community. Accordingly, the Center has presented a wide mix of high-quality events, including Broadway shows, dance performances, pop and country stars, family shows, international performances, school-time shows and business conferences and seminars.

Today, the Capitol Center for the Arts is the largest and most successful performing arts center in New Hampshire and has helped position Concord as a cultural destination. Its richly varied programming attracts diversified audiences. Broadway, ballet and country & western fans alike travel from all over New England to attend performances at the Capitol Center.

The Capitol Center educational programs attract some 25,000 school children a year from throughout New Hampshire. Educators and parents prize the school-series performances, teacher workshops, outreach activities and symposia on such topics as racism and intolerance. Working with local and state educators, the Capitol Center has successfully linked the school series to statewide curricula goals, making the programming even more valuable. Tickets and rental rates are kept affordable, subsidizing nonprofit organizations and school children.

Each year, approximately $10,000 in tickets are donated to organizations serving disadvantaged children and families, including the Concord Boys and Girls Club, the Concord Housing Authority, Child and Family Services, the Friends Program, Merrimack Valley Day Care, The Children’s Place and the Senior Companion Program.

The Capitol Center also houses The Governor’s Hall, a full-service function room that can accommodate up to 350 guests, and the adjacent Kimball House, a Victorian mansion featuring a stately, formal dining room and board room.

From the outside you would never know that this is a classic movie/vaudeville theatre, unless you walked around the side and back of the building and could clearly see the original part of the complex. The original entrance and foyer (though I have never seen them) were entirely restructured to give a “modern cultural center” look to the place, creating a kind of functional if radical hybrid. There is a large waiting rooom off the new lobby where banquet functions can be provided.

The auditorium is a place of simple elegance, and the Egyptian motif alluded to in the description is rather subdued and employs the asp symbol in various decorative configurations. The waiting area has some nice framed Capitol publicity posters of mostly early sound movies that played here: Four Sons, Unfaithful, Ladies Love Brutes, Dawn Patrol, East Lynne, The Vagabond King, Remote Control, Little Accident, Once a Sinner.

The theatre maintains a professional 35mm projection booth, and there is a big-screen movie series in addition to the cultural and theatrical bookings. This year people can see Rear Window, Invasion of the Body Snatchers, To Kill a Mockingbird, The Godfather, Babe, The Magnificent Seven, Grease, A Night at the Opera, A Day at the Races.

A wide variety of Broadway plays, popular acts, opera, children’s programs, dance, symphony add to the yearly line-up which includes something for every taste.

The Capitol Center for the Arts represents what can be successfully done with old theatres in towns across America where they have not been wantonly destroyed.

Re: Dresden…“twice at Carnegie Hall in New York"
My mistake. That was actually Avery Fisher Hall.

Regarding this theater’s timeline, I have a performance list that states David Bromberg (singer) performed here on 3/13/83.

This was the “date” place during my high school years in the early 60’s. I remembr going to see Ivanhoe (with a young Liz Taylor). The place was pretty basic, but the movies were fun and the concessions were even more basic. There were no soft drinks available from the staff. They only came from a coin operated dispenser in small cups.

Later in the 70’s they would host the Gile concerts (free). I also remember going to see Warren Miller ski documentaries. Remember, NH had a lot of skiing then and more now. Some of the early Gile concerts included Mitch Miller, and also vatious military bands.

The Bektash Temple and Capitol Theatre were designed by Manchester architect Chase Roy Witcher. Motion Picture News of February 27, 1925, said that bids would soon be taken for the $250,000 project. Construction proceeded slowly. The Temple was dedicated in October, 1926, and the theater went into operation in early 1927.

The Theatre Historical Society archive has the MGM Theatre Report for the Capitol; it’s Card # 477A. Address is “Concord St.” There is an exterior photo taken April 1941. Condition is Good. The report says it opened about 1925 and shows MGM films. There are 974 orchestra seats and 443 balcony, total: 1,417. Competing theaters were the Concord and the Star.

Uploaded two exterior and one interior photo. Note: name should be Capitol Center for the Arts.