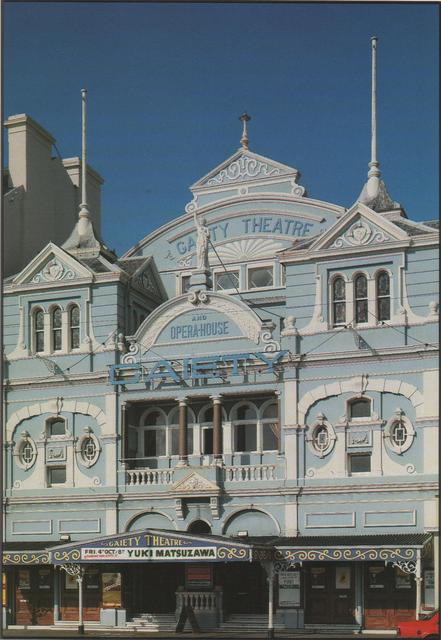 Located on the main promenade in Douglas, the Marina was opened in July 1893, and was designed by architect William J. Rennison. It could accommodate 2,000 attendees to dances and variety shows. It was soon financially in trouble and was taken over by new operators and re-named Pavilion Theatre. It underwent major re-construction to the plans of noted theatre architect Frank Matcham, and re-opened as the Gaiety Theatre and Opera House on 16th July 1900 with Ada Blanche in the musical comedy “The Telephone Girl”. It was operated by the Palace & Derby Company, who operated most of the entertainment venues on the island. The theatre was equipped with a Bioscope box, which was located at the rear of the stage, and films were screened from the early days.

In the early-1930’s it was wired for sound, initially a ‘Fox’ sound system was installed, and films were screened on Sundays and occasionally on weekdays. A new projection box was built at the rear of the gallery seating area at the top of the auditorium.

After the end of World War II in 1945, it went over to full cinema use and was equipped with a British Thomson Houston(BTH) sound system. Cinema use continued in winter months until the end of the 1970’s, when the theatre was taken over by the Manx government.

From the early-1980’s there were hopes that the faded glory of the theatre could be restored. In 1990, work began on a meticulous restoration and renovation of the Gaiety Theatre, which is now the pride of the island. The Gaiety Theatre is a Grade II listed building.