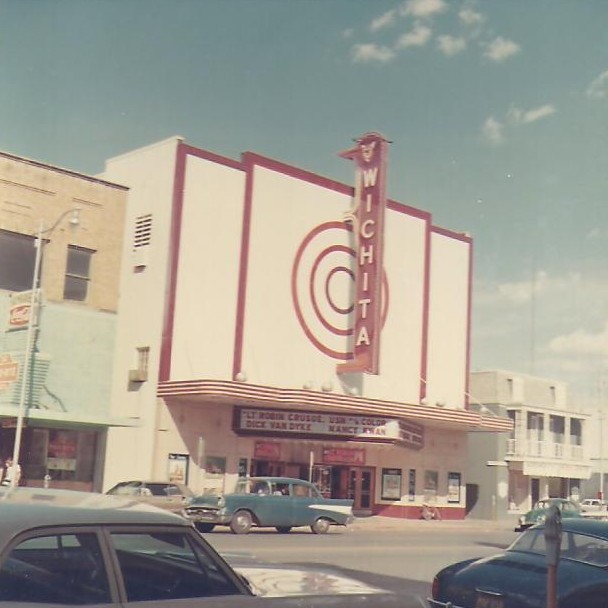 The Wichita Theatre opened on December 21, 1908. It was remodelled by architectural firm Pettigrew & Worley in 1939. It closed as a movie theatre in July 1980. It is still open and operating as a performing arts center.

All I recall about HTWWW is that it was Cinerama in Dallas. I don’t remember any publicity for it and I didn’t see the movie. It might have been 70mm. The Village in Fort Worth publicized all their 70mm presentations but we always drove to Wichita Falls since it was closer to Bowie. Can you believe schools made “field trips” to The Ten Commandments? Remember the Saturday matinees for kids? Remember the William Castle movies with gimmicks? We missed the dual-projector polarized 3-D movies in the early 50’s but we saw The Mask with anaglyph 3-D sequences in downtown Wichita Falls.

I saw “The Mask” too and remember that damned tiled head as just about the scariest thing! That would probably have been at the Strand or State (where you could go afterwards to Thomas’s across the street and load up on fake vomit and other childhood delights of the era).It’s possible I may have seen “Hondo” in 3-D, but when I saw the recent restoration at the Academy I remembered nothing about it.I also doubt if the Wichita’s booth could accomodate four interlocked projectors. Dallas' Cinerama house was the Capri (ex-Melba) downtown.

Don Lewis: Great photos of a theatre I do remember when I was living in Wichita Falls (1970-1971). Hubby was with the USAF at Sheppard in the finance office.

Hello Patsy and thanks for noticing the photos! The credit actually goes to Billy Smith for taking them; I am editing and doing the submissions.

It’s my understanding that dual strip 3-D used only two projectors. There were intermissions for changeovers. Hard to believe but perhaps the disruptions were minimized by larger reels. What were the reel durations? 20 and 60 minutes? Alamo Drafthouse in downtown Austin did authentic polarized dual projector presentations several years ago but of course platters now enable non-stop projection which is what we experienced.

From 1975, a movie ad for the Wichita Theatre in Wichita Falls.

The Wichita Theater is now operating as a church: One Life, a contemporary Christian evangelical community church (www.onelifecc.org). The building immediately to the north has been also connected and it’s really nicely fixed up now.

Dial M For Murder is streaming on PopcornFlix on Roku. It is Free with Commercials or pay 99 cents to view without commercials. There was an Intermission at 54 minutes.