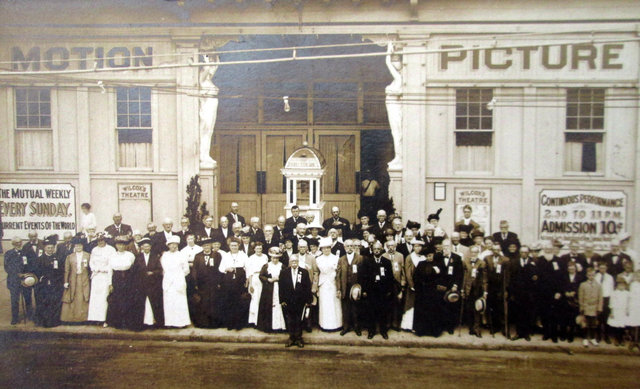 The December 2, 1916, issue of insurance industry publication The Standard ran an item about a fire at Savin Rock which destroyed a Wilcox Motion Picture Theatre. I don’t know if the burned house was this theater or a predecessor to this theater:

“New Haven, Conn., November 24. The Jackson Dance Hall, and the Wilcox Motion Picture theatre were destroyed, and several nearby hotels and cottages were damaged by fire tonight at Savin Rock pleasure resort. A high wind was blowing at the time, and fearing that the whole district might be wiped out, the West Haven fire department called on New Haven for assistance. The fire was finally put out after property of value estimated at $78,000 had been destroyed.

“All of the buildings were of frame construction.

“The insurance loss was small as many of the buildings were uninsured.”I’ve found no other dated references to a Wilcox or Wilcox’s Theatre, but there was a Wilcox’s Pier, featuring a large restaurant, fronting on Beach Street just east of Oak Street, and across Beach Street was a Wilcox’s Miniature Railway. They appear on the Savin Rock Map (East) which is linked at this web page.

You can also look for more history at the Savin Rock Museum.