Opened as the Sword & Shield Cinemas in Sherwood Park on February 11, 1983. The twin screen cinema had 379 seats and the opening movies were Ben Cross in “Chariots of Fire” and Mike Mazurki in “Challenge to be Free” It was later taken over by Landmark Cinemas of Canada and became a four-screen complex respectively seated 318, 189, 191 and 218 in each theatre for a total of 916 seats.

The Sword & Shield Cinema Centre was closed in 2001 when the Galaxy Cinemas Sherwood Park was opened nearby.

This opened on February 11th, 1983 with subrun movies. Later taken over by Landmark Theatres (Canada). 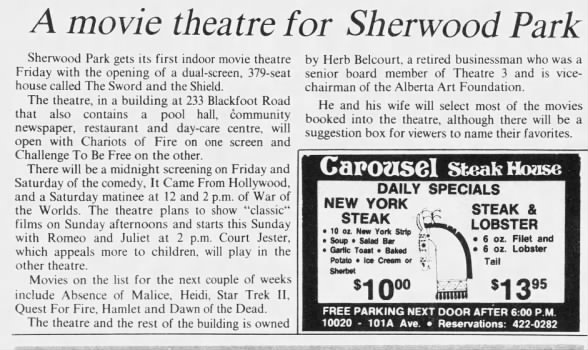