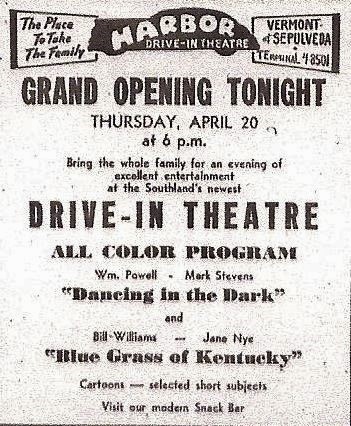 Located in Los Angeles, close to Torrance, CA. The Harbor Drive-In was opened on April 20, 1950 with William Powell in “Dancing in the Dark” & Bill Williams in “Blue Grass of Kentucky”. The drive-in was a favorite of family audiences during the 1950’s and 1960’s. My family went there often. It was initially operated by Thrifty Theatres Corp.

Operated by Pacific Theatres, the screen tower had a distinctive design and was painted a bright yellow, and featured that favorite of families at drive-ins, the children’s playground located just beneath the screen, and a busy snack bar. It was closed on May 15, 1972 with George C. Scott in “The Hospital” & Peter Finch in “Sunday Bloody Sunday”.

Here is an August 1960 ad from the Long Beach Independent:
http://tinyurl.com/mdyqr9

Here is an August 1965 LA Times ad for a swap meet at the Harbor:
http://tinyurl.com/ktqpzg

The LAT reported the robbery of the Harbor manager, Joseph Green, by a man and woman bandit team on July 20, 1954.
http://tinyurl.com/lbd3ac

This link should show an aerial view of the drive-in, circa 1952. If the link doesn’t work, let me know.
http://tinyurl.com/y9btafy

Still looking for any photos of the marquee or screen.

The Torrance Library recently digitized local papers going back to 1913. I have posted the link below. If you search for Harbor Drive-in, there are many entries about its colorful manager Joe Greene, along with ads, mostly in the 1950s.

The manager of the drive-in back in the early fifties was Joe Greene, as I mentioned in 2009. He was also an actor. In reading the local archives, there were a couple of occasions when he was an actor in the film that he was showing at the theater.

Hey kencmcintyre, thanks for the Torrance Library link!

But the Harbor site was apparently never in Torrance, though that is the Zip Code for the post office that would deliver its mail today. First there’s a half-mile wide tendril of Los Angeles sits between the old drive-in and Torrance. According to Google Maps, the Harbor is east of that part of LA and west of Carson, so it sits in a small census-designated place (CDP), appropriately called West Carson.

The Theatre Catalog and Motion Picture Almanac both listed the Harbor under Los Angeles. Topo maps from 1953 & 1959 put the Harbor in unincorporated space, again across the LA tendril from Torrance. The 1966 & 1975 topos show Carson extending north of the drive-in site, which is still untouched. The 1982 maps shows the area in a small blob of territory - part of Ironsides? Is that a neighborhood or another CDP or something?