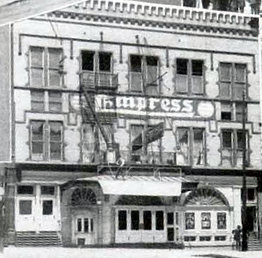 Located on the 100 block of West Broadway. The Empress Theatre was another house operated by Butte’s Sutton theatrical interests.

There were two Butte theaters called the Empress. This web page with a photo gives the address of the second Empress Theatre as 101 West Broadway.

According to Lost Butte, Montana, by Richard I. Gibson, Dick Sutton opened this house in 1908 as the Lulu Theatre, named for his daughter. By 1912 it was operating as the Orion Theatre. When the first Empress Theatre, located across the street in the former Maguire Opera House, was destroyed in a spectacular fire on May 25, 1912, the Orion was renamed the Empress and began presenting Sullivan & Considine vaudeville shows.

In 1931, the second Empress suffered a major fire of its own and was never reopened. Its ruins were demolished in 1935.