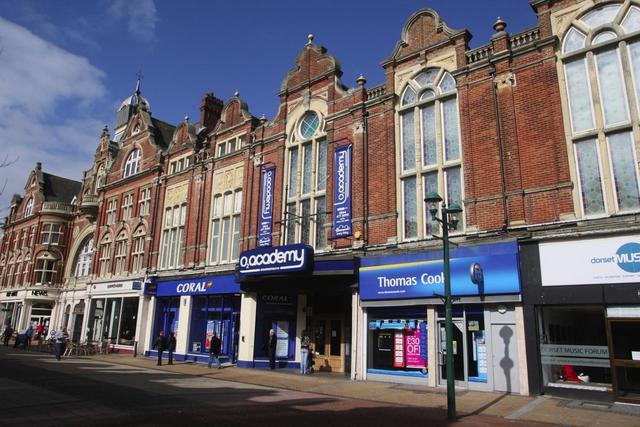 Located in the Boscombe district of Bournemouth, Dorset. The Grand Theatre & Pavilion was opened on 27th May 1895 with a burlesque extravaganza “Crusoe the Cruiser”. Seating was provided in orchestra stalls, dress circle and gallery levels. The proscenium is 26 feet wide and the stage is 37 feet deep. In early-February 1897, it was screening films as part of the programme. The films were supplied by Birt Acres Cinematographe and by Edison’s Animated Pictures. In September 1904 actress Ellen Terry appeared here. In 1908 films were supplied by Ruffell’s Imperial Bioscope. It was soon re-named Hippodrome Boscombe. In 1910, four boxes were added on each side of the proscenium. Many famous stars appeared here, including: Marie Lloyd, Vesta Victoria, Vesta Tilley, Harry Tate, Percy Honri, Dutch Daly, Fred Karno, Gerty Gitana and Harry Lauder.

Other owners later took over and in 1945, it was taken over by the Butterworth family. On 18th August 1947, Laurel & Hardy appeared on stage, twice nightly for a week long run. The Hippodrome Bournemouth was closed in 1957.

It was converted into a dance hall, first known as the Royal Ballrooms, then Mecca Ltd. took over in 1972 and it became Tiffany’s. From 1982 it was a nightclub named the Academy. In recent years, it has been managed by the O2 Group and presents concerts, known as the O2 Bournemouth.

It has been designated by English Heritage a Grade II Listed building.