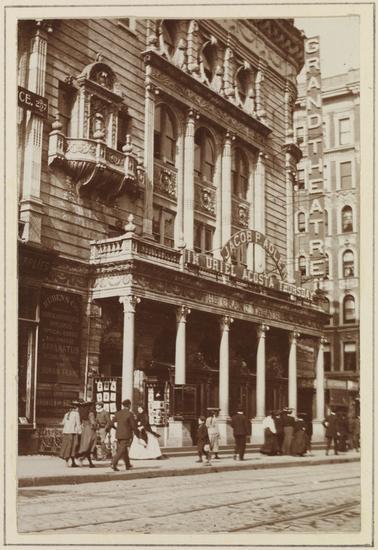 Located on the southeast corner of Grand Street and Chrystie Street in Lower Manhattan. The Grand Theatre was opened on February 4, 1903 as a Yiddish theatre. It was a four story theatre and loft building, designed by architect Victor Hugo Koehler.

In December 1909 it was leased to Bedford Theatrical Company, and by 1913 was playing Marcus Loew attractions, possibly a mix of vaudeville and pictures.

In the exuberant days of the late 1920s, it was thought by the city’s planners that Allen Street could become a broad boulevard in the manner of certain avenues in Paris, but lined with tall, luxurious apartment blocks, like Park Avenue north of Grand Central Station. A dubious idea at best, given the surrounding neighborhood, but the onset of the depression put an end to the plan in any case. With today’s less grandiose approach to planning, the buildings lost to those projects would probably now be far more valuable to the city than is the empty space the projects created.