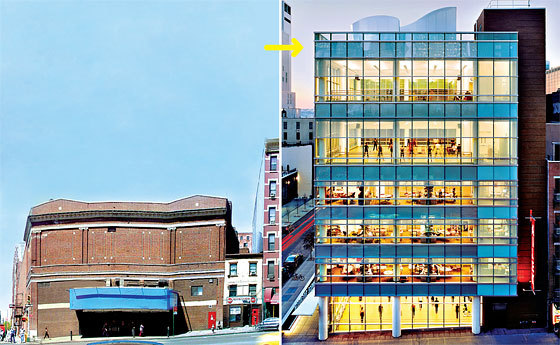 At 851 9th Avenue, northwest corner of W. 55th Street, the Chaloner Theatre was opened by 1926 when it was operated by the Yost Theater Circuit. It was converted by CBS into a television studio in the early-1950’s. TV production continued until the building was demolished in October 2002 to make way for the Alvin Ailey Dance Theatre.

From the 1950s to ‘63, The Little Theatre was home to ABC’s “That’s Entertainment” a weekday variety show plus many quiz shows. After '63 Westinghouse (Group W) leased the theatre for syndicated shows.

Sesame Street moved its production to the Reeves Tele-Tape facility at 81st Street & Broadway until the late 80’s prior to moving to the Kaufman Astoria Studios.

Also, to confirm “Benjamin’s” 2007 entry above re: Merv Griffin being taped @ the Little Theatre — he’s correct. I have a ticket for Merv Griffin dated October 12, 1965 at the Little Theatre. Griffin also had a short tenure at the Cort Theatre (138 W 48th St) which CBS occupied. It was designated as CBS Studio 54!

As for his recollection of Dick Clark having a one a week show in the Little Theatre, I recall seeing documentation to that effect.My memory isn’t clear enough to say 100% absolutely though. I can say for sure, however, that Beech-Nut Spearmint Gum presented “The Dick Clark Beech-Nut Show” from ABC’s studio center on 67th Street. Again referencing a ticket, this one dated Aug 11, 1960. Clark also taped “Dick Clark’s World of Talent” at the same studio (26 W 67th St. – likely ABC’s TV-2) on Oct. 6, 1959.

Warren Harris' mention of Cavett at a 58th Street “ex-theatre”: that was ABC Studio TV-15 @ 202 W. 58th St. a.k.a. the Elysee Theatre. ABC owned the theatre for over 30 years. Demolished in 1985, it was home to countless ABC shows, notably Dick Cavett and “The $20,000 Pyramid.” The last tapings to take place there were “Kids Are People Too” in the summer of 1980 after “Pyramid” was canceled in May 1980. And after “Kids” wrapped its season, the syndicated “The $50,000 Pyramid” utilized TV-15 in early 1981. After that, I know of no other shows. There was, though, an ABC Stockholders Meeting held there one morning sometime after the theare went dark for good. I happened to attend it!

Warren, thank you for your Feb 2004 entry re: the Town Theatre. I always wondered about its early history.

A mention is made in Boxoffice Magazine (December 18, 1961) that the Town was to be reconverted from a CBS TV studio back to a first-run movie location in May 1962 by Brandt after 12 years serving as a studio.

The Little Theater housed the 1969 season of syndicated Beat the Clock (organist Dick Hyman played from the balcony) and was used by Westinghouse for David Frost when Merv went to CBS in 1969. I understand Dick Clark’s Saturday Night Beechnut Show and Johnny Carson’s Who Do You Trust? originated there when it was occupied by ABC.

Interesting story about the Elysee and Pyramid. After being cancelled by ABC, producer Bob Stewart struck a deal with Colgate Palmolive to tape a barter-syndicated version of Pyramid for 1981 at the MGM Grand in Las Vegas. On November 21, 1980 the MGM Grand suffered a major fire, causing Pyramid to return to its former home at the Elysee to tape that season. It was likely the last show there.

Alas, our posts are wandering off topic (the Town Theatre) which CT’s guidelines request we not do. Therefore, one last OT mention from yours truly and any further discussion re: the Elysee/ABC Studio TV-15 will be posted at that that theatre’s listing.

Yes, I was aware of that MGM Grand fire story! Fascinating stuff. The Elysee (ABC Studio TV-15) was home to the last season of KIDS ARE PEOPLE TOO! which ended its run in Sept ‘82. I may have misspoken above re: THE $50,000 PYRAMID being the last occupier of the theatre. I worked for ABC at the time and have a ticket for one of the KAPT! tapings. I have to double-check the date as $50K ended its tapings in April '81.

The address shown here for the Town Theatre is not correct. It should read 851 Ninth Ave.

Sesame Street filmed here from 1969-1982, when it moved to Reeves’ other Manhattan facility on 81st St. That site is now a CVS.

jdicarlo, you got it backwards. Sesame Street shot from 1969 to 1983 at Reeves/Teletape’s 81st Street Studio. When the 81st Street Studio was sold to developers in 1983, R/T moved the production to this studio, CBS' former Studio 58. They called it Studio 55 because it was at the corner of 55th Street and Ninth Ave. Sesame Street subsequently moved to the Kaufman-Astoria Studios in 1988. I was employed at both studios (81st Street and 55th Street) at various times through the 80’s and 90’s when I worked for R/T and later Unitel Video. Unitel took over operation of Studio 55 in 1987 until they too went out of business in 1998.